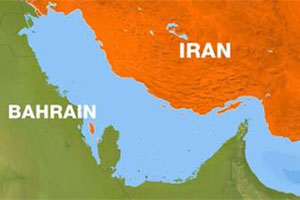 Bahrain has detained two men as they were trying to smuggle arms and ammunition including machine guns and C4 explosives from Iran, the Kingdom’s interior ministry said in a statement on Saturday.

The two men on board a boat dropped the weapons to seabed when a Bahraini helicopter approached them, but coastguard retrieved the ammunition.

The Interior Ministry’s statement said its investigation and questioning of the pair revealed that one of them was trained in Iran in August 2013 and “underwent intensive training in making and using explosives”.

According to the statement, he was given money by the Iranian Revolutionary Guard to buy the boat and the men received the weapons off the coast of Iran.
Bahrain recalled its ambassador to Tehran for consultations on Saturday after what it said were repeated hostile statements made by the officials of the regime in Tehran, Reuters reported.

Bahrain on Saturday summoned an Iranian diplomat and highlighted its condemnation of the repeated hostile statements made by officials in Tehran against the Kingdom.

This is the second time this month for Bahrain’s Foreign Ministry to summon a diplomat from Iran to stress the need for the principles of good neighbourliness, compliance with international laws as well as the Charter of the United Nations, which all stress on preventing and rejecting all forms of interference in the internal affairs of others states, Xinhua News Agency reported.

“The Kingdom of Bahrain affirms that the continuation of deliberate provocative statements made by Iranian officials at all levels and their interventions to support subversion and sedition only reflects a clear hostile stance,” stated the ministry in a statement.

Independent human rights activist Bahraini Salman Nasser announced they will launch on Sunday an online petition against the Iranian interference and the provocative statements.