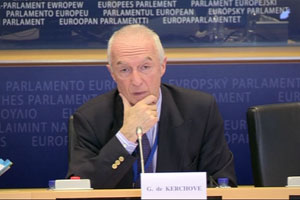 A nuclear deal with Iran may spur more proxy wars in the Middle East, the European Union’s counter-terrorism coordinator said on Monday.

Gilles de Kerchove addressed the EU Parliament on Tuesday in which he stressed the rising threat of regional escalations.

“Many of you mentioned and I think which is probably one of the most important factors, this war by proxy from the Sunni world which feels a bit on the defensive because of the rise of Iran, and that was another question whether the nuclear deal will have an impact,“ Gilles de Kerchove said.

Asked if a deal to curb Iran’s nuclear ambitions being negotiated in Switzerland would have an impact, he said: “Yes, of course, because Iran will have even more money… and therefore on the Sunni side there might be temptation “to fight against Iran by proxy.”

Major powers are trying to reach a preliminary agreement with the Iranian regime aimed at stopping it from achieving the ability to develop a nuclear bomb, in exchange for an easing of sanctions.

Mostly Sunni Saudi Arabia is leading air strikes in Yemen to try to halt advances by Iranian-allied Houthis, the latest front in its widening contest with Iran for power in the region.