Ex-U.S. envoy: Iraq is not lost to Iran’s regime 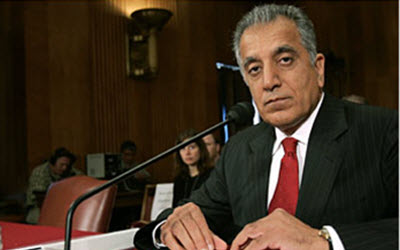 Writing in Friday’s edition of The Wall Street Journal, Mr. Khalilzad, a former U.S. ambassador to Afghanistan, Iraq and the United Nations, says: “The conventional wisdom in Washington, D.C., seems to be that Iraq is hopelessly lost to Iran. The best that the U.S. can do, this view suggests, is to destroy Islamic State there and develop a special relationship with an independent or semi-independent Iraqi Kurdistan.”

“Washington should do those things. But it also should not abandon the rest of Iraq. Based on recent meetings in Baghdad with Iraqi leaders, including Prime Minister Haider al-Abadi, I believe that the country is not lost.”

“It’s true that Iran has considerable influence in Iraq. The total withdrawal of U.S. forces in 2011 created a vacuum that Iran and its regional rivals tried to fill, pulling the country apart. The disintegration of the Iraqi army and the rise of Shiite militias to combat Islamic State, also known as ISIS, increased Iranian influence further. Yet many Iraqi Shiite leaders are growing disillusioned with Iran and want to strengthen ties with the U.S.”

“In the eastern province of Diyala, deadly ISIS attacks are continual reminders of the cost of putting Iran’s proxies in charge of a battleground. In January the Iranian-backed Shiite militias of the Badr Organization claimed victory in the province without U.S. support, but it is far from being ISIS-free today.”

Iraqi leaders fear, Mr. Khalilzad pointed out, that the militias will outlive their useful role against ISIS and become parties to, or instruments in, a Shiite civil war.

He added that there is “strong resentment over Iranian heavy-handedness and disrespect for Iraqi sovereignty. I heard complaints that Qasim Suleimani, commander of Iran’s Quds Force, attends classified security meetings in Baghdad without a visa or announcement. In November, Iran sent half a million people, not all of them innocent pilgrims, across the border without proper documents.”

“There are hard-line Iraqi Shiites—like Mr. Sadr and several pro-Iranian militia groups, such as the Asiaeb Al Haq—who want no or minimal relations with the U.S. But a majority, in my view, want good relations with both Iran and America. These include Ayatollah Sistani, the spiritual leader of Iraqi Shiites, and the prime minister. I even met a few who are hostile to Iran and very friendly to the U.S.”
“Iraq is decidedly not lost to Iran—and today U.S. leverage is at a new post-withdrawal high. Washington has an opportunity to rebuild influence if it takes the right steps. The Iraqis want to pursue a balanced regional policy but they need assurances, as they navigate the tricky waters of regional sectarian rivalries, that America has their back. Strong support exists—among Sunnis, Shiites and Kurds—for a renewed relationship with the U.S. It would be a mistake for Washington not to reciprocate,” he added.