As the verdict in the hearing of the Iranian regime’s incarcerated diplomat-terrorist Assadollah Assadi approaches, new information about his role as the head of the clerical regime’s network of terrorism and espionage in Europe has raised more concerns about the threats from Tehran.

Assadi and his three co-conspirators will receive their verdict on Thursday from a court in Belgium, where they are detained for attempting to bomb the 2018 “Free Iran” gathering of the National Council of Resistance of Iran (NCRI) in Paris, France.

German authorities arrested Assadi on July 1, before he could reach Austria, where he worked as the third secretary of the regime’s embassy in Vienna. The police found two notebooks in his car, one green and other one black. The black notebook contained information and codes about the 2018 bomb plot. The green notebook revealed Assadi’s travels to 11 countries in Europe and contained receipts of money he paid to his other operatives, still unknown.

The new revelations have been in the center of media attention, since they reveal the extensiveness of Iran’s network of terrorism and spies.

“A green notebook, found in Assadollah Assadi’s car when he was arrested in Germany, meticulously detailed 289 places across 11 European countries where he is believed to have made contact with agents of the regime,” wrote the United Kingdom’s Sunday Express.

According to the Express, Assadi “was Europe bureau chief for the Iranian Ministry of Intelligence and Security.”

“Assadi’s green notebook shows the true extent of his European connections. Of the 289 locations meticulously listed, 86 were landscapes and various visiting sites, 53 were stores, 45 were restaurants and 23 were hotels. Though ostensibly a diplomat based at the Iran’s Viennese embassy, only 38 were in Austria, barely 13 percent of the total. Germany featured most heavily, with 114 locations, followed by 42 locations in France. Other countries he visited include Italy, Hungary, the Czech Republic, Belgium, the Netherlands, Sweden, Switzerland, and Luxembourg,” the Express wrote about the new information about Assadi’s role in leading the regime’s terrorism network in Europe.

Mr. Farzin Hashemi, the Deputy Chairman of the National Council of Resistance of Iran (NCRI), told the Express: “The regime’s espionage network in Europe, which is used for terror plots like the one in Paris, should be exposed and destroyed and the EU should demand from Tehran to dismantle it terror apparatus, giving reliable guarantees that will never commit a similar plot or risk facing severing diplomatic relations.” 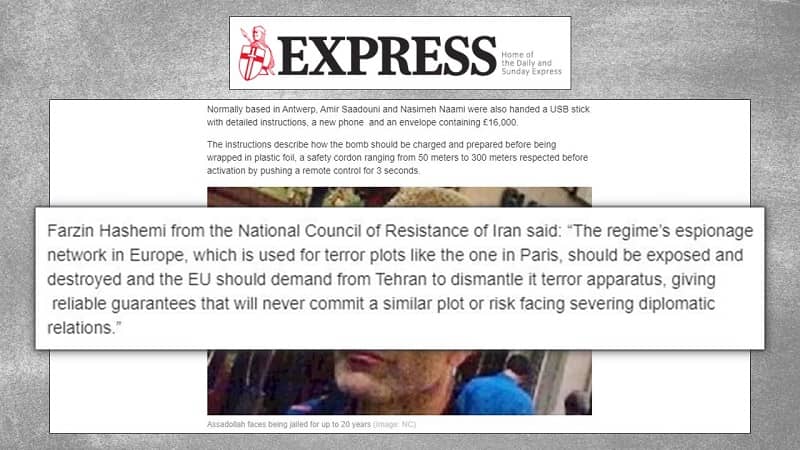 “In a joint statement they urged the EU to ‘designate Iran’s Ministry of Intelligence and the IRGC in their entirety as terrorist entities’, adding: ‘The undisputed evidence in the terrorist Villepinte case indicates that the involvement of Iranian authorities at the highest level has been upgraded into plans for mass murder,’” the Express wrote, quoting the statement by European former officials.

The regime’s authorities tasked Assadollah Assadi, one of their diplomat-terrorists stationed in the Austria to carry out a bomb plot against the NCRI’s annual “Free Iran” gathering in Paris. The European authorities arrested Assadi and his three accomplices, Amir Sadouni, Nasimeh Naami and Mehrdad Arefani.

The Iranian regime’s Ministry of Foreign Affairs, led by Mohammad Javad Zarif, facilitated this crime by granting diplomatic privileges to Assadi. According to the Belgian prosecutors Assadi used a commercial airliner to transfer 500 grams of TATP explosive from Tehran to Vienna. He did not go through security check since he held a diplomatic passport.

Since his arrest, despite the undeniable evidence, Assadi has refused to cooperate with authorities and even refused to appear in the court, claiming he has diplomatic immunity.

The Belgian prosecutors highlighted that based on international law, since he was trying to commit murder, the authorities were able to strip Assadi from his diplomatic immunity.

The new information once again shows how Tehran has used the EU’s inaction and appeasement policy to continue spreading terrorism across Europe by using its diplomatic missions and diplomats. Assadi claims diplomatic immunity, because his boss Zarif, who was also involved in this terrorist attack, enjoys diplomatic immunity and is widely greeted by European leaders.

The 2018 bomb plot has showed how the EU’s wrong policy of appeasing the mullahs’ regime has endangered security in Europe.

Assadi’s case is a momentum for the European leaders to set the record straight and end the regime’s terrorism once and for all.

EU leaders should impose sanctions on the regime for its state-sponsored terrorism. They should shut down the regime’s embassies and so-called cultural centers and expel its agents from Europe. Taking these concrete actions will certainly help Europe to contain the mullahs’ rampant terrorism.

Previous articleIran State-Run Media Identify Regime’s Corruption as Root of Economic Crisis, Warn of Uprisings
Next articleQ&A With Ali Safavi on Iranian Regime’s Terrorism and the Case of Assadollah Assadi