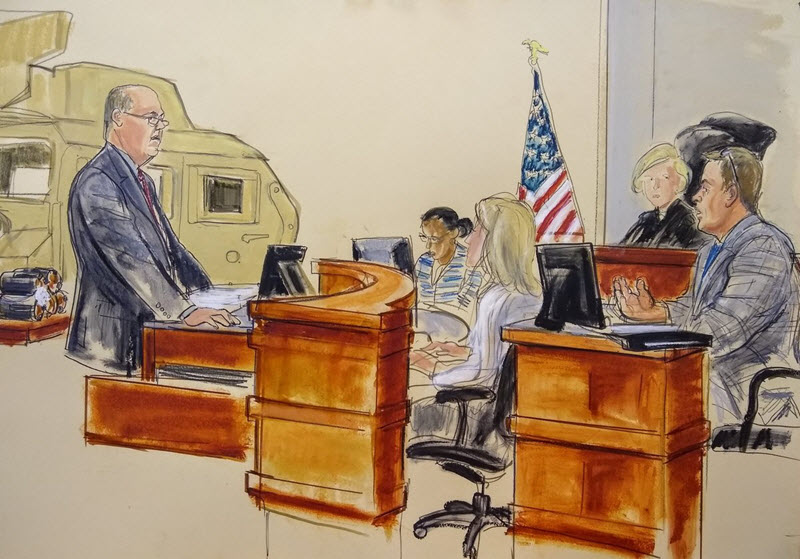 In the second day of a federal trial, where civilian law firms and hundreds of victims of terrorist attacks during the Iraq War are taking on the Iranian Regime, experts have been connecting the dots between the improvised explosive device (IED) attacks that killed or maimed over 1,000 US troops and the lingering pain and suffering that they caused.

According to military experts, the initial attacks on coalition forces were brutal, but not sophisticated, meaning that they were easily countered. Later in the war, Army Capt. Wade Barker said, the enemy began using more sophisticated bombs and deployment methods, i.e. the “explosively formed penetrator”. This leads us to the source of the training and devices: the Iranian Regime.

The attorneys – Tab Turner from Arkansas and a collection of lawyers from the New Jersey firm Osen – are wanting to prove a link between the weapons, training and tactics used against coalition forces by terrorist groups in Iraq and the Iranian Regime. If they are successful, the plaintiffs could be eligible for financial compensation from a specially designated fund for victims of state-sponsored terrorism.

The explosively formed penetrator (EFP), which was capable of getting through multiple layers of amours, was used in most of the 90 attacks being dealt with in this court case and is the key piece of evidence of Iran’s involvement. After all, the engineering prowess required to build one was far greater than the typical insurgent would have.

Experts can easily tell the difference between an EFP device and any other bomb because of the shape of the hole created in the armour and the traces of copper present at the site. It’s the physical evidence that points to Iran as the guilty party, according to attorneys.

Baker analyzed the physical traces of a handful of the 90 attacks listed in the lawsuit, but also determined that the militants employed more sophisticated techniques that they likely learnt from the Iranian Regime direct or through their Lebanese-based Hezbollah militia.

He explained that the ignition systems and machined parts, as well as the methods used, point to Iran-backed Hezbollah, as it would require a “classically trained engineer”.

Attorneys in the trial had already shown how Iran would lead terrorist groups like Hezbollah to attack US forces, using testimony from civilian experts and military leaders.

The troops affected by these attacks suffered both mental and physical wounds that far exceed the normal combat trauma, which experts said can be impossible to shake.