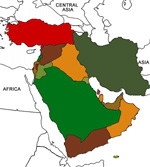 NCRI – Mahmoud Ahmadinejad, mullahs’ president reiterated his doubt about the Holocaust according to media reports in Iran on Tuesday.

"If the killing of Jews in Europe is true and the Zionists are being supported because of this excuse, why should the Palestinian nation pay the price?" the state television’s Web site quoted Ahmadinejad speaking to an Islamic conference in Tehran.

To undermine efforts for peace in the Middle East, Ahmadinejad was quoted as saying: "The West’s policy has always been in favor of the Zionist regime and to the detriment of the Islamic world. It can’t be a judge or mediator now.”
In a press conference in Mecca, Saudi Arabia, earlier this month, Ahmadinejad also called for Israel to be moved to Europe. His call provoked widespread international outrage.
Ahmadinejad has been unapologetic about taking Iran on a more openly defiant course, insisting on Iran’s right to develop its nuclear program and often using rhetoric reminiscent of the 1980s heyday of the anti-Shah Revolution.
Iran’s supreme leader, Ayatollah Ali Khamenei, who has ultimate say on all matters, has backed Ahmadinejad’s calls for Israel’s elimination.
Alarmed by the ongoing policy of appeasement by the West, Mr. Mohammad Mohaddessin, chair of the Foreign Affairs Committee of the National Council of Resistance of Iran said on December 10: “At a time when the president of the mullahs’ regime demagogically threatens regional and global peace and tranquility during the summit of the Organization of Islamic Conference and calls for the establishment of a global Islamic empire, any hesitation in referring Tehran’s nuclear file to the UN Security Council for imposing comprehensive sanctions, will move the region and the world closer to a tragedy.”