Iran Regime Ambassador in Iraq: Our Frontline Is Mosul, Lebanon, Aleppo and Syria 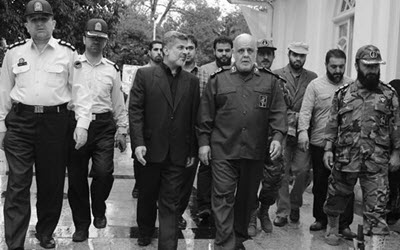 NCRI – Senior adviser to Qassem Soleimani commander of the IRGC terrorist Quds Force, Iraj Masjedi, who has recently been appointed as Iranian regime’s ambassador in Iraq said Mosul, Lebanon, Aleppo and Syria is the regime’s frontline.

According to state-run Mehr news agency on January 13, IRGC Brigadier General Iraj Masjedi, who was speaking on the anniversary of the killing of another Pasdar (IRGC Revolutionary Guard) in Syria, said: “Yesterday the frontline of our fighters was Abadan, Khorramshahr, Mehran and… and now the frontline is Mosul, Lebanon, Aleppo and Syria.”

Earlier, in June 2016, he had said that fighting in Syria and Iraq means defending Iran’s borders.

Pasdar Masjedi is one of the most senior and oldest commanders of the terrorist Quds Quds Force and his responsibility in these years was mainly to facilitate the regime’s meddling and terrorist attacks in Iraq in which he has played the main role. In recent years, his mission was to prepare and provide mercenaries forces and dispatching them to Syria.

In September 2007, Masjedi was the head of Ramadan Base and he was in charge of preparing plans for training Iraqi militias. Commandment of Ramadan base has been and is the main position of Iranian regime for meddling in Iraq.

Another responsibility of Iraj Masjedi in Iraq is to dispatch Iraqi militants to Syria. In mid-June 2015, Pasdar Masjedi, in a trip to Iraq and during a meeting with the terrorist groups and militias affiliated to Iran regime, set a quota for each for each group to send troops to Syria before the start of Ramadan, to dispatch about 4 to 5 thousand Iraqi militants to Syria. This project was carried out after the regime suffered heavy human casualties and losses in Syria.