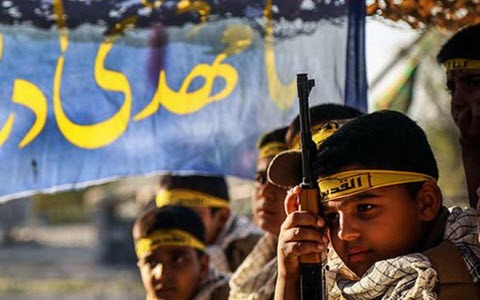 NCRI – The Iranian Regime is routinely recruiting children as young as 15 into armed conflicts, according to the UN Security Council, in violation of international law and the UN Charter on children’s rights which they are a party to.

The recruitment of anyone under the age of 18 into active, armed combat is considered a war crime by the International Criminal Court but it is prevalent under the Iranian Regime and no one appears to be stopping them.

Dr. Majid Rafizadeh, an Iranian-American political scientist and leading expert on Iran, wrote on Arab News: “The increasing recruitment of children by the Iranian regime to fight in conflicts not only has serious psychological and physical implications for the children and their families, but also inflicts serious damage on the security and stability of the region. It is incumbent on the international community and human rights organizations to follow up on their promises, take immediate action and hold the Iranian leaders responsible for violating international law, abusing human rights and children, and committing a war crime. “

Most notably, the Iranian Regime has recruited foreign children (including refugee children) to fight on the front lines of the Syrian Civil War for the Bashar Assad dictatorship. They are doing this in order to minimise the casualties of the Iranian and Syrian government troops, as their deaths are more likely to be reported and cause a loss of morale among the troops.

The Iranian Regime believes that the lives of these children are unimportant and of little consequence, so they order their Revolutionary Guards (IRGC) and Quds Force to recruit the children that they use as cannon fodder.

They promise vulnerable children that, if they become soldiers, their families will be afforded legal residency status or Iranian citizenship or better financial prospects- all of which are hard to come by for poor, immigrant families. The Iranian Regime exploits the poverty and marginalisation of these people, rather than implement actual changes to help them.

The alarm was also raised recently by Human Rights Watch who were concerned over the Iranian Regime’s recruitment of Afghan children into armed conflict.

Sarah Leah Whitson, Middle East director at Human Rights Watch, said: “Iran should immediately end the recruitment of child soldiers and bring back any Afghan children it has sent to fight in Syria. Rather than preying on vulnerable immigrant and refugee children, the Iranian authorities should protect all children and hold those responsible for recruiting Afghan children to account.”

The Iranian Regime must be held to account for its war crimes and crimes against children by the UN and the ICC. This is not up for discussion. They are routinely exploiting marginalised children and sending them to their deaths. The Regime must be punished.

Previous article
Ms. Jahangir’s Report to the General Assembly Doubles the Need for Establishment of an International Investigation Commission on 1988 Massacre
Next article
General McMaster: Most Dangerous Course of Action Is to Ignore Iran Regime’s Threat