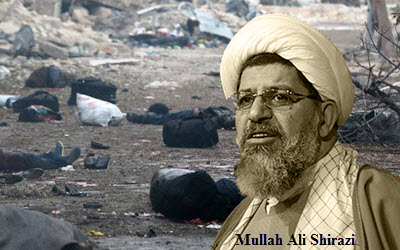 NCRI – While the world is disgusted and perplexed of crimes against humanity and atrocities committed against the defenseless people of Aleppo, the highest authorities of the Iranian regime admit to undertaking these crimes and brazenly congratulate each other.

Mullah Ali Shirazi, Khamenei’s representative in IRGC Qods Force, in a message to Qasem Soleimani, the criminal commander of the terrorist Qods Force, described the horrible crime in Aleppo as a “proud” and “unmatched triumph” in Aleppo and “the biggest festival on the eve of the Prophet’s birth anniversary” and congratulated him.

He asked the mercenaries deployed to Aleppo calling them “defenders of the shrine” to hold prayer of gratitude.

The clerical regime, in order to cover up its criminal aggression in Syria, calls its Revolutionary Guards and agents deployed to Aleppo and other fronts of the war in Syria defenders of the shrine, while the city of the Shrine is 300 kilometers (hundreds of kilometers) away. The spirit of Islam and all Muslims of the world are appalled by the unprecedented and horrifying atrocities and renounce it.

Reportedly militants linked to the Iranian regime and Assad’s regime military have street executed hundreds of defenseless civilians and burn corpses of children and women. All medical staff of Al-Hayat hospital in Kolasse neighborhood of Aleppo are among those executed. According to the Syrian emergency organization, besieged neighborhoods of Eastern Aleppo is covered by bodies. Dozens of civilians are buried under rubbles and their cries are being heard while there is no possibility to save them. Syrian opposition leaders say 1800 people have been executed, 600 women arrested and many missing during the past few days.

This catastrophe is the result of giving an unjustified and illegitimate open hand to the clerical regime in taking IRGC troops to Syria and setting the Middle East in fire and blood, killing hundreds of thousands of Syrian defenseless people especially women and children.