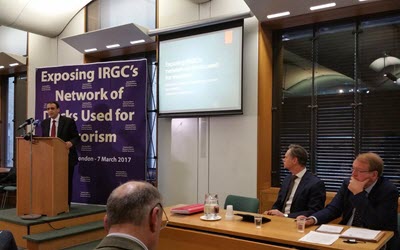 Nearly half of all shipping docks in Iran are operated by the regime’s military, and it is using shell companies to smuggle weapons and other illicit goods, according to a new report. Reported Perry Chiaramonte from FoxNews.com.

A total of 90 docks have been taken over by the Islamic Revolutionary Guards Corps (IRGC), which is using them to circumvent sanctions and fund terrorist activities in the Middle East and beyond, according to the anti-regime People’s Mojahedin Organization of Iran (PMOI/MEK).

“Based on the direct order of the current supreme leader, Ali Khamenei, no authority is allowed to oversee the activities of the IRGC at border areas, be it on the ground, sea or air, and it can import anything in any quantity without paying any customs fee,” PMOI officials said in a statement provided to Fox News. “The IRGC uses these docks for its unlawful activities.”

The importing and exporting of these illicit goods has allowed the IRGC to net $12 billion annually, the group estimates.

Trade vessel under direct control of the Guard uses these docks to transfer the goods and other equipment and even arms to other countries away from the eyes of international supervision.

“These docks play a key role in the regime’s efforts to evade sanctions,” said MEK officials. “Investigations by PMOI sources within the regime concluded that unlawful exports of arms to proxy forces in the region are carried out through these docks.”

These PMOI sources helped to identify three organizations – Admiral Group, Hafez Daya Arya and Valfajr – as shipping companies being used as fronts for smuggling weapons to other countries throughout the region, in particular, Yemen.

Since most Yemani docks are closed to Iranian ships, the IRGC’s shell companies began using ports in nearby Oman to smuggle weapons into Yemen. The PMOI alleges that they primarily used Soltan Qaboos Port in Muscat, Sohar Port in North Oman and Salalah Port in South Oman.

For the rest of their operations, the guard is operating in ports in the Hormozgan and Bushehr Provinces along the Persian Gulf, as well as, the Farsi and Faror Islands, the group charged.

News of the PMOI investigation comes as the Trump administration is considering designating the Revolutionary Guard a terrorist group.

It also comes on the same week as an extensive study on the “Destructive role” of the IRGC in the Middle East region was released by the European Iraqi Freedom Association [EIFA].

In their report, EIFA alleges that the IRGC is “directly involved in the hidden occupation” of Iraq, Yemen, Syria and Lebanon and “meddling” in the internal affairs of at least eight countries, including Egypt, Bahrein, Jordan and Lebanon.