Iran: Rouhani Led a Campaign of Lying Regarding Shooting Down of Ukrainian Passenger Jet 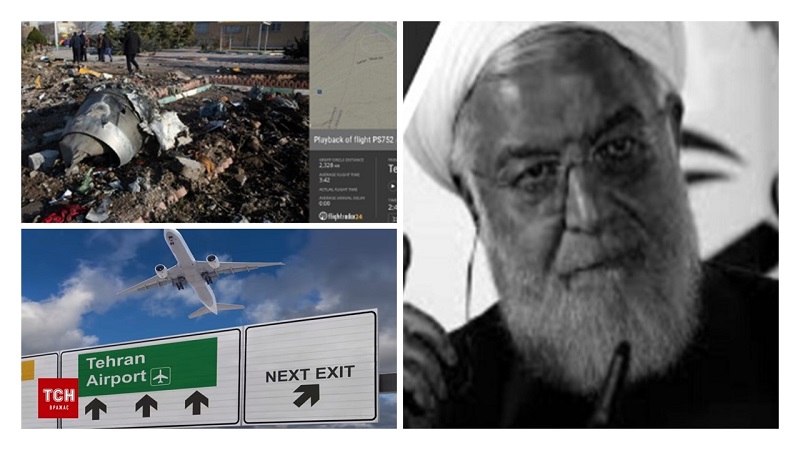 The Ukrainian television channel, TSN, has revealed shocking evidence about the Iranian regime’s shooting down of a Ukrainian airliner, killing all 176 passengers aboard.

This evidence is an audio file of the conversation between the co-pilot on Aseman Airlines flight 3768, during its landing approach at Tehran’s airport, and the control tower, simultaneous with the departure of Ukrainian International Airline flight 752 and its subsequent downing by two missiles.

This shocking evidence once again confirms the Iranian regime’s top officials, especially its president Hassan Rouhani, were aware of this incident.

The control towers in Iran are under the regime’s Civil Aviation Organization (CAO) which is an agency of the Ministry of Roads and Urban development and by extension Rouhani. Even though he was immediately informed about this horrific crime, Rouhani waited for 72 hours before announcing it, and during his announcement, he claimed he wasn’t aware of the incident until the morning of Saturday, January 11.

In the recording, the dispatcher at the control tower addresses the pilot of the Ukrainian airliner in English and gives him instructions, then talks to the pilot of Iran’s Aseman 3768 flight in Persian. The Iranian co-pilot asks if the flight area is “active,” meaning if the flight zone is safe. The response of the dispatcher is garbled and inaudible. Then Iranian pilot is heard saying he can see “some lights, they look like missiles Is something happening?” Previously in another shameless lie, Rouhani’s spokesperson, Ali Rabiee, falsely claimed that the government was told of the cause of the crash on the afternoon of January 10, 2020.

In addition, the regime’s Minister of Roads and Transportation Mohammad Eslami claimed that a “technical defect” was the reason for the airliner crash. “Rumor about a terror attack, explosion, or shooting toward the plane as the reason for the incident and crashing of the Ukrainian airliner are wrong and a ’technical defect’ was the reason,” ISNA quoted Eslami as saying on January 8. On Thursday morning, the spokesman of the regime’s Ministry of Roads and Transportation Qassem Biniaz claimed, “The reason for the airliner crash was one of its engines catching fire.”

On January 11, IRGC Brig. Gen. Amir Ali Hajizadeh, the Aerospace Force commander, stated that on the morning of Wednesday, January 8, immediately after the downing of the plane, he had informed “officials” that the plane had been shot down by friendly fire. This means the regime’s Supreme Leader Ali Khamenei and Rouhani were informed about this incident.

These facts once again prove that the regime’s top official, like Khamenei and Rouhani, were intending to misguide the international community and decline answering for their crime against humanity via staging an orchestrated campaign of lies and fabrications.

The regime’s crime in downing a passenger jet was followed by nationwide protests, with Iranian students at their forefront. The protesters targeted the regime in its entirety in their slogans and specially called Rouhani and Khamenei liars and the main culprits of this crime. Protesters once again called for the regime to be overthrown.

Mrs. Maryam Rajavi, the President-elect of the National Council of Resistance of Iran (NCRI), called the incident yet another “Major crime perpetrated by the clerical regime, which the Iranian people will neither forgive, nor forget. The main culprits are Khamenei, Rouhani, and IRGC commanders, who must be prosecuted and punished for this horrific crime.”

Previous article
Maryam Rajavi: Lengthy Prison Sentences for Political Activists Are Inhuman and Must Be Condemned
Next article
MEK and NCRI Supporters Across the World Echo Iran People’s Desire for Regime Change