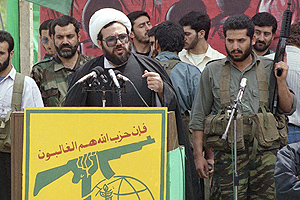 Iran’s regime has been sending billions of dollars to fill the pockets of terrorist fighters across the Middle East, including in Yemen, Syria, Lebanon and the Gaza Strip, according to a private U.S. government report ordered by Senator Mark Kirk.

Iran’s defense budget ranges anywhere between $14 billion to $30 billion a year and much of that money goes to fund terrorist groups and rebel fighters throughout the region, according to the Congressional Research Service report conducted at the request of Sen. Kirk, an Illinois Republican, The Washington Times reported on Saturday.

The report, first viewed by The Washington Free Beacon, discloses that funding for these terrorist groups could be much higher than originally estimated, as Tehran often hides public records about its defense spending.

“Some regional experts claim that Iran’s defense budget excludes much of its spending on intelligence activities and support of foreign non-state actors,” the report states, stressing that actual military spending could far exceed the $30 billion that Iran discloses annually, The Free Beacon reported.

“Similarly, another study claims that actual funding for the [Iranian Revolutionary Guard Force’s Al Quds Force] is ‘much greater’ ” than the amount allocated in the state budget, as the group’s funds are supplemented by its own economic activities,” the report said.

The report gives “low-ball” estimates for each of the groups supported by Iranian funding.

In Syria, for example, Iranian-backed fighters are paid between $500 to $1,000 a month to fight in support of Bashar Assad’s regime, according to the Congressional report.

Afghan fighters in Syria have disclosed that they “had recently returned from training in Iran and planned to fight in Syria,” the report notes. These militants “expected to receive salaries from Iran ranging from $500 to $1000 a month.”