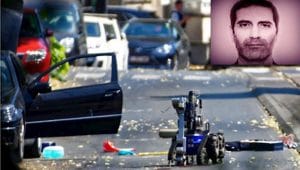 “After the [Iranian Resistance] annual gathering in June 2018 in Paris, the spread of baseless news was enough to cause some European countries to engage in diplomatic controversy toward [the regime],” read the article.

“The German Federal Prosecutor’s Office claimed that Assadollah Assadi, a diplomat based in Vienna, is suspected of collaborating with a couple who intended to attack a gathering in Paris. The Belgian judiciary also ordered the arrest of this Iranian diplomat, and as a result, he lost his diplomatic immunity within 48 hours. Finally, the German prosecutor handed over the diplomat to the Belgian judiciary,” the article added.

On July 1, 2018, European security services arrested Assadollah Assadi, Tehran’s third counselor at its embassy in Vienna, and a couple, while attempting to bomb the opposition’s rally. Assadi had personally delivered 500 grams of the TATP explosives to the terrorist couple in Luxembourg. The target was the annual “Free Iran” gathering of the National Council of Resistance of Iran (NCRI). Mrs. Maryam Rajavi, the NCRI’s president-elect, and hundreds of renowned politicians from both sides of the Atlantic attended “Free Iran,” gathering in Paris. The bombing plot was the regime’s desperate attempt to eliminate its viable alternative, following the nationwide Iran protests in 2018, during which the Iranian Resistance played a leading role.

“The 2-year inactivity of our diplomatic apparatus finally led the Belgian judiciary to announce the end of the investigation finally and initiate the trial of Assadi and three [other terrorists],” Vatan-e Emrooz added.

The regime made every possible effort to have somehow Assadi released. While the diplomat-terrorist was caught red-handed, the regime’s Foreign Minister Mohammad Javad Zarif, called the foiled terrorist plot a “false flag operation.” Many of the regime’s apologists tried to blame this operation on some “rogue” parties.

Meanwhile, an official at Belgium’s state security service underlined in a letter to the federal prosecutor: “The plan for the attack was conceived in the name of Iran and under its leadership. It was not a matter of Assadi’s initiative.”

On October 9, Reuters revealed that on March 12, during a meeting with Belgian authorities, Assadi: “Told police that armed groups in Iraq, Lebanon, Yemen, and Syria, as well as in Iran were interested in the outcome of his case and would be ‘watching from the sidelines to see if Belgium would support them or not.’”

Assadi’s threats once again confirm the terrorist plot against the Resistance gathering in Paris was approved at the highest level of the mullahs’ regime, which funds all terrorist groups in the Middle East.

Years of the European Union’s wrong “appeasement,” policy of the mullahs’ regime have emboldened the godfather of terrorism to have its diplomat bomb a rally in the heart of Europe, and when arrested, the incarcerated diplomat issues threats.

Assadi’s trial is the best opportunity for the EU countries to hold the entire terrorist regime to account for its malign activities. Ending Tehran’s terrorist activities will be achieved through firmness.