Sunday Telegraph, August 21 – British soldiers in Iraq are being killed by advanced "infra-red" bombs supplied by Iran that defeat jamming equipment, according to military intelligence officials.

The "passive infra-red" devices, whose use in Iraq is revealed for the first time by The Sunday Telegraph, are detonated when the beam is broken, as when an intruder triggers a burglar alarm. They were used by the Iranian-backed Hezbollah group against Israel in Lebanon from 1995. 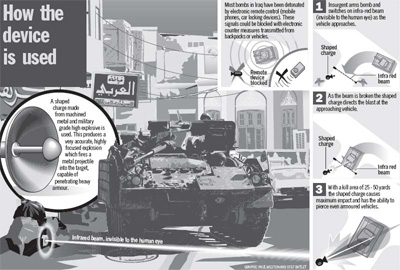 Sunday Telegraph, August 21 – British soldiers in Iraq are being killed by advanced "infra-red" bombs supplied by Iran that defeat jamming equipment, according to military intelligence officials.

The "passive infra-red" devices, whose use in Iraq is revealed for the first time by The Sunday Telegraph, are detonated when the beam is broken, as when an intruder triggers a burglar alarm. They were used by the Iranian-backed Hezbollah group against Israel in Lebanon from 1995.

A radio signal is used to arm the bomb as a target vehicle approaches. The next object to break the infra-red beam – the target vehicle – detonates the device.

Coalition officials see the disturbing development as a key part of an aggressive new campaign by Teheran to drive coalition forces out of Iraq so that an Islamic theocracy can be established.

American and British intelligence officials believe that the Iranian Revolutionary Guard is training, supplying and funding part of Iraq’s insurgent Shia network and that its activities have been stepped up since the spring.

"These guys have picked up in two years what it took the IRA a quarter-century to learn," said an Army bomb disposal officer in Iraq.

Four British soldiers are believed to have been killed by infra-red devices made in the town of Majar-al-Kabir. The bombmaker, in his early forties, was one of the agitators behind the mob killing of six Red Caps there in June, 2003. The man, whose name is known by this newspaper but has not been published for security reasons, has connections to Iran, and has reportedly been seen with agents from Teheran. His arrest has been ordered, and two of his lieutenants were detained in June.

After the arrests, however, three soldiers from the Staffordshire Regiment were killed when their armoured Land Rover was blown up by a roadside bomb in al-Amara, last month as they were lured into a trap.

Guardsman Anthony Wakefield of the Coldstream Guards died from wounds inflicted by a similar infra-red device in al-Amara in May. As the "top cover" gunner, his head and shoulders were exposed in an armoured Land Rover. The bomb was set at a precise height and directed towards the road so it would hit a soldier in this position.

"This was something completely new," said one military intelligence officer. "Before, they used to keep bashing away with the same crude devices again and again. The Iranian influence has shown itself in the sophistication of their bombs and a new ability to innovate."

British officials said Iran had also been providing Shia insurgents with "shaped charges", which use a directional explosive force to fire a metal projectile that penetrates heavy armour.

Iran’s interference threatens to inflame sectarian tensions in Iraq and hasten what coalition officials dread most – civil war between the Shias and the Sunni minority.

Iran’s recent elections, in which the hardline Mahmoud Ahmadinejad was elected president gave fresh impetus to its "meddling" in Iraq, according to Mohammad Mohaddessin, an Iranian opposition leader in exile in Paris.

"The regime in Teheran is very concerned about a democracy being created right next to Iran," he said. "They also believe that the more chaos there is in Iraq, the less attention will be paid by America and Britain to Iran’s nuclear ambitions."

Iranian policy had already been boosted by Iraq’s elections. They returned a Shia-dominated government led by Ibrahim al-Jaafari, who lived in exile in Iran, rather than the secular Iyad Allawi, the candidate preferred by Washington.

Before the introduction of infra-red devices, bombs in Iraq were usually set off by an electronic remote control signal found in a mobile telephone, car locking device, garage door opener or even a child’s toy.

They could be blocked by electronic countermeasures developed by the Army in Northern Ireland.

These are powerless, however, against infra-red beams, which can be modified from burglar alarm systems. Military commanders have briefed soldiers to be more cautious and avoid rushing into potential attacks. Patrol routes are varied so that no pattern is set.

Infra-red beams have been used by the IRA, and by the Red Army Faction to kill Alfred Herrhausen, the chairman of the Deutsche Bank, in 1989.

"There has always been cross fertilisation of terrorist technology across the terror diaspora," said a former Army bomb disposal officer. "Infra-red is virtually impossible to jam whereas radio control and cell phone systems are jammable."