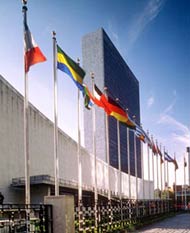 NCRI – The UN Security Council on Friday joined the growing international furor over revolting remarks by clerical regime’s president Ahmadinejad, questioning the Holocaust and suggesting that the "tumour" of the state of Israel be relocated to Europe.

A statement released by Britain’s UN envoy Emyr Jones Parry, the current council president, said the body’s 15 members "condemn the remarks about Israel and the denial of the Holocaust attributed to Dr Mahmoud Ahmadinejad."

The council fully backed a statement released by UN chief Kofi Annan Thursday noting that only last month the UN General Assembly had passed a resolution which "rejects any denial of the Holocaust as an historical event, either in full or in part".

Annan also called on all member states "to combat such denial, and to educate their populations about the well established historical facts of the Holocaust, in which one third of the Jewish people were murdered, along with countless members of other minorities."

The council also joined Annan in reaffirming "the rights and obligations of the state of Israel as a full and long-standing member of the United Nations", and in reminding that all UN member states "have undertaken to refrain from the threat or use of force against the territorial integrity or political independence of any state."