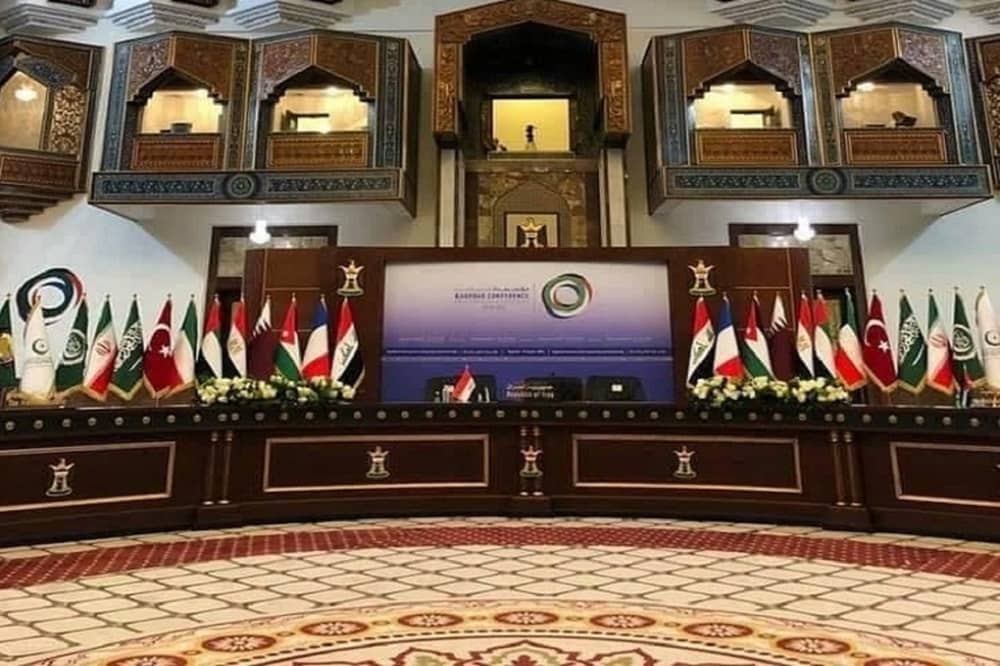 On August 28, the Iraqi government held a conference aiming to ‘reduce tensions in the region,’ ‘respecting the sovereignty of the Iraqi government,’ and ‘removing Iraq from an arena of confrontation between foreign powers.’ The conference was attended by the leaders of Egypt, Jordan, Qatar, France, the Prime Minister of the UAE, and the foreign ministers of Iran, Saudi Arabia, Turkey, and Kuwait. While the Iranian regime didn’t like the occasion, it certainly wanted to exploit and pose to be at the center of the summit.

Days before the conference, the people of Iraq conducted social media campaigns declaring that the new regime’s president Ebrahim Raisi is a ‘persona non grata’ in their country. Hashtags in the Arabic language like “no to Raisi in Iraq” became popular trends. Whether that scared Tehran off and led to the decision to send the foreign minister instead of the president is a good guess, but the regime should have seriously outweighed the consequences of either option.

Nevertheless, the Iranian regime’s delegation was headed by the new foreign minister, Hossein Amir Abdollahian, who might fail to become the center of the summit, but he certainly managed to make headlines.

Iranian state media claimed that the goal of Baghdad’s summit would be an attempt by Mustafa al-Kadhimi to warm up relations between Tehran and Riyadh. As state-run Mizan website affiliated with the regime’s judiciary has noted, even the name of the conference was disputed. But Iraqi Prime Minister Mustafa Al-Kadhimi made public that he will invite senior officials from regional countries in a bid to help to promote peace and stability in his country. Tehran certainly noted the move, who’s had always tried to stay on top of events in the Middle East, especially in Iraq, which it considers its own backyard.

Referring to a wide range of seminars and conferences in Tehran in the last two decades, state–run Armane Melli wrote: “We must say that now Tehran is slowly being marginalized… and support for the Palestinian people is no longer seen in Tehran, and Iran can no longer afford it… These are issues that should be considered as strong signals that show Iran’s position in the region is dropping.”

The regime was also displeased that its closest ally in the Arab world, Syria, was not invited. The latter was regarded as a serious slam, considering that Tehran had always dictated its terms to Baghdad.

The disappointment has also been put on display in body language. While the conference attendees wanted to pose for photographs, the regime’s FM decided to break protocol and refused to stand on the second row marked for foreign ministers. He chose to stand between the leaders of Egypt and the United Arab Emirates, which caused some frustration by Sheikh Mohammed bin Rashid and a serious critic from domestic and international media. When asked why he’d refused to stand on his marked place, Amir Abdollahian responded: “I stood where the Islamic Republic deserved to stand.”

Another issue that angered the regime was the presence of Emanuel Macron. For years, the Iranian regime had called for ‘foreign troops’ to leave the region, and former foreign minister Zarif had called for a ‘regional dialog.’ But the French president met with Iraqi leaders, visited the Shiite holy shrine in Al-Kadhimiya, and during a news conference on Saturday, he said: “No matter what choices the Americans make, we will maintain our presence in Iraq; to fight against terrorism.”

Consequently, Saeed Khatibzadeh, the Iranian regime’s foreign ministry’s spokesman, stated: “After these ill-advised remarks by the French President, who created the perception that Iraq’s neighbors are the problem, I express my regret that this shows how far France is from the realities of Iraq.”

The aftershocks of these blows could be felt in the Iranian state media. Vatane Emrooz newspaper threatened the Iraqi Prime, writing: “Mr. Kadhemi, watch out with the dangerous game of yours!” Mizan news agency accused Macron of blocking Syria’s invitation to the Baghdad Summit and that he was trying to win influence in Iraq for its oil.

On the other hand, Aftabnews, affiliated with the so-called “reformist or the moderate front,” posted videos and wrote about how Amir Abdollahian’s blunders in conducting his speech in the Arabic language has faced harsh critic among Arabs on social media.

In return, Keyhan, a newspaper whose editorial policies are directed by the supreme leader’s office, slammed the domestic critics. Referring to Rouhani’s failure to bring the nuclear deal to fruition and trusting the US, it cited: “Those who shed crocodile tears over the Baghdad meeting in recent days are the same group that inflicted pure damage on the country. The same spectrum that called Total and Crescent treaties a major victory and vowed that the signature of the US Secretary of State is a guarantee (for Iran).”

As the new administration in Tehran has announced that it will have a regional approach as its focus, more maneuvering, as well as saber-rattling in the Middle East, is expected. Dealing with the Taliban on the eastern border will push Tehran more to influence the upcoming election in Iraq to strengthen its grip on the western neighbor. Whether it succeeds in replacing al-Kadhimi with a puppet that listens to the Iran-backed militia depends on how its policies are met with firm responses from the Iraqi society, the region, and the world community.