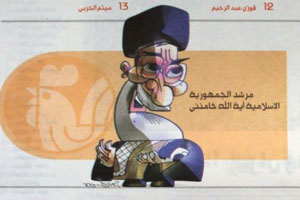 NCRI -The Press Freedom Advocacy Association in Iraq,  an Iraqi media freedom watchdog, has expressed concerns over an attack against the Baghdad-based newspaper “Al Sabah Al Jaded,”  after publishing a caricature of the Iranian regime’s  Supreme leader Ali Khamenei on February 6.

Three bombs exploded outside  the headquarters of the “al-Sabah-al-Jadeed” (New Morning) newspaper on February 9, severely damaging the newspaper’s offices in Baghdad.

PFAAIQ issued a statement on February 10 condemning the attack. The statement quoted newspaper’s editor, Ismail Zaye, as saying that the author of the caricature, Ahmad al-Rubaie, had received threats from armed groups.

The Chairman of the Press group, Uday Hatem , has called for action to deter armed groups through bringing to justice those involved in such attacks.

It is a common knowledge in Iraq that those who criticize the Iranian regime receive death threats, become victims of abductions, torture, bombing  and assassinations by the Iranian regime linked armed groups that enjoy the support of Nouri Maliki government.