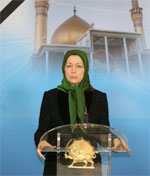 NCRI – In a gathering of Sunni and Shiite Muslims on Monday in Auvers-sur-Oise, residence of Mrs. Maryam Rajavi, President-elect of the National Council of Resistance of Iran, the Samarra bombing in Iraq was condemned and the Iranian religious dictatorship was blamed for this barbaric act.

In her speech to the gathering which was aired live on the Resistance’s TV network, Mrs. Rajavi expressed her condolences to all Muslims in particular Shiites for the criminal bombing of the holly site in Samarra and underscored the brotherhood among Sunnis and Shiites. She also emphasized that Samarra was a holly city for all Muslims and it did not belong to a particular religious minority.

Mrs. Rajavi strongly condemned Iranian regime’s meddling in Iraq and described the Samarra bombing, planned attacks on Sunni mosques, killing of religious leaders, political figures, journalists and others as part of a war that the ruling mullahs in Iran have initiated in Iraq against its people.

She said the Iranian regime’s motives for inciting such violence is quite clear as the mullahs failed to achieve their ominous goals in Iraq following the elections in that country. She reminded that a front of Iraqi democratic forces is shaping up at the moment which is aware of the threats of fundamentalism posed by Tehran. She emphasized that a national unity government in Iraq does not serve the interest of religious fascism ruling neighboring Iran.

Mrs. Rajavi also praised the leaders of Iraqi political parties and groups who acted promptly and called for unity immediately after the Samarra bombing and blamed the Iranian regime for this heinous crime.