Members of Congress Call on US Justice to Prosecute Assadollah Assadi 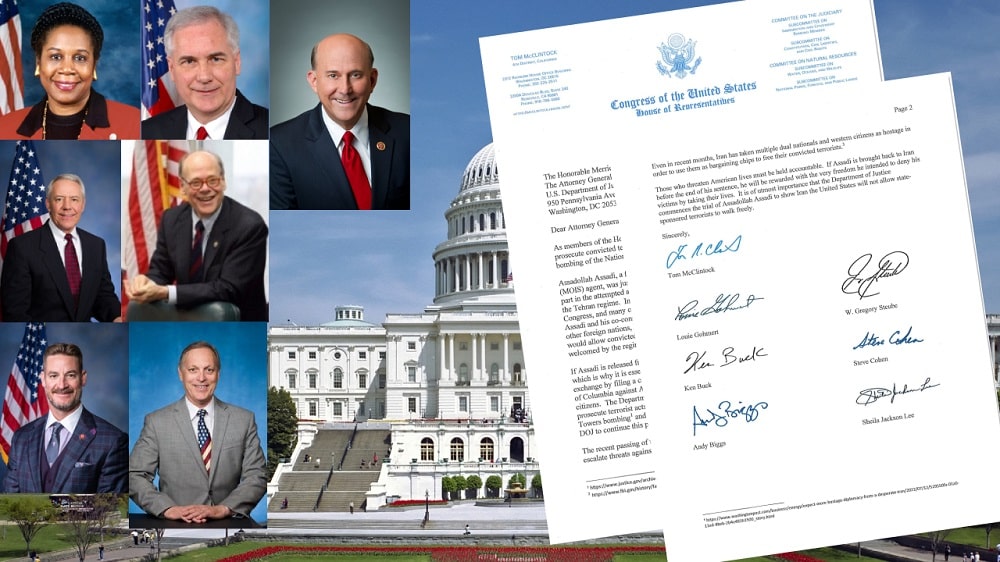 On September 6, seven members of the United States Congress from both major political parties asked US Attorney General Merrick Garland to immediately prosecute convicted terrorist, Assadollah Assadi, for the attempted bombing of the National Council of Resistance of Iran (NCRI) 2018 gathering in Paris, where American citizens, including members of Congress, and many current and former American government officials were also targeted.

Referring to a treaty between Brussels and Tehran, the members of Congress warned that if Assadi is released from Belgium custody, American lives will come directly under threat and called on the U.S. Department of Justice (DOJ) to prevent the prisoner exchange by filing a criminal complaint and arrest warrant in the U.S. District Court for District of Columbia against Assadi for conspiracy to conduct a terrorist attack against American citizens.

Read the full text of the letter of seven members of the U.S. Congress to the US Justice Department:

Congress of the United States

As members of the House Judiciary Committee, we are writing to urge you to immediately prosecute convicted terrorist, Assadollah Assadi, one of the main perpetrators in the attempted bombing of the National Council of Resistance of Iran’s (NCRI) 2018 gathering in Paris, France.

Assadollah Assadi, a former Iranian diplomat and Iran Ministry of Intelligence and Security (MOIS) agent, was just recently prosecuted and sentenced to 20 years in Belgium prison for his part in the attempted attack on NCR-I, one of the main organized democratic resistance groups to the Tehran regime. In this attack, hundreds of American citizens, including members of Congress, and many current and former American government officials were also targeted by Assadi and his co-conspirators, Despite this and several protests from United States officials and other foreign nations, Belgium Parliament has now just approved a ‘treaty’ with Iran which would allow convicted terrorist Assadi to return to Tehran where he would be undoubtedly welcomed by the regime as a hero.

If Assadi is released from Belgium custody, American lives will come directly under threat, which is why it is essential that the U.S. Department of Justice (DOJ) prevent this prisoner exchange by filing a criminal complaint and arrest warrant in the U.S. District Court for District of Columbia against Assadi for conspiracy to conduct a terrorist attack against American citizens. The Department of Justice has used this authority in the past to investigate and prosecute terrorist acts that violated U.S. law, wherever they occurred, such as the Khobar Towers bombing and the 1998 East African bombings of two U.S. embassies. It is vital for the DOJ to continue this practice and hold Assadi responsible.

The recent passing of this treaty has emboldened the Iranian regime to free its terrorists and to escalate threats against the NCRI, including against this year’s Free Iran Summit in Albania.

Even in recent months, Iran has taken multiple dual nationals and western citizens as hostages in order to use them as bargaining chips to free their convicted terrorists.

Those who threaten American lives must be held accountable. If Assadi is brought back to Iran before the end of his sentence, he will be rewarded with the very freedom he intended to deny his victims by taking their lives, It is of utmost importance that the Department of Justice commences the trial of Assadollah Assadi to show Iran the United States will not allow state-sponsored terrorists to walk freely.