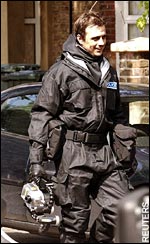 Scotsman – MI6 has warned that Iran could direct terrorist attacks on British interests, if talks over its nuclear programme fail.

The assessment emerged yesterday in a report by MPs and peers who were given access to the confidential work of Britain’s intelligence agencies.

Surveying the main security threats facing Britain, the committee reported that Iran looms large in the agency’s assessment. "There is increasing international tension over Iran’s nuclear programme and backing of groups such as Lebanese Hezbollah," the Intelligence and Security Committee (ISC) said in its annual report.

"There is a possibility of an increased threat to UK interests from Iranian state-sponsored terrorism, should the diplomatic situation deteriorate," the report added.

In particular, a Foreign Office claim that the Iranian government is directly responsible for insurgent attacks on British troops in southern Iraq has been quietly withdrawn, in a diplomatic gesture meant to soothe relations with Tehran.

The ISC report did not elaborate on the potential threat from Iran, but the Islamic regime in Tehran has previously been accused of supporting and arming militant groups operating both in the Middle East and around the world.

Meanwhile yesterday, the Cabinet met in London to review Britain’s counter-terrorism strategy. A government report explaining anti-terror measures to the public will be published next month, Downing Street confirmed.

Previous articlePM’s warning on Iran
Next articleIran: 30000 Iranians in Paris declare support for democratic change in Iran with Maryam Rajavi