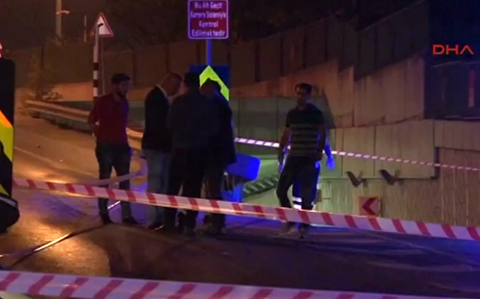 NCRI – Terrorists involved in the assassination of the Iranian entrepreneur and managing director of ‘GEM’ media network, who was killed on April 29, 2017 in Istanbul, Turkey in an armed attack, have been arrested, Turkish newspaper Joumhuryat reported on May 18, 2017.

According to this report, the terrorists were arrested by the Serbian police, while trying to depart from Montenegro with fake passports, it seems they have been trying to go to Iran through a European country, the report further adds.

A source close to Karimian family confirmed the arrest and said, they have been handed over to Turkish police, Radio France International (RFI) reported.

It is noteworthy that Secretariat of the National Council of Resistance of Iran on April 30, 2017 issued a statement concerning this horrible crime stating:

“The Iranian Resistance strongly condemns the vicious assassination of Saeed Karimian, the chairman of Gem TV and his colleague in Istanbul that was carried out by the Islamic Revolutionary Guards Corps (IRGC) on IRGC Day upon Khamenei’s order. The Iranian Resistance calls for the prosecution of the perpetrators and masterminds of this hideous crime, bringing them to justice, and blacklisting the IRGC.”

The statement further added: The clerical regime is more than ever in need of domestic repression and resorting to these sorts of anti-human crimes on the verge of its sham presidential election and intensification of factional feuding.

It is worth noting that from a while ago, the media outfits affiliated to the IRGC and the Ministry of Intelligence (MOIS) were setting the stage for this assassination and attributing it to the People’s Mojahedin Organization of Iran (PMOI).

Immediately following the assassination, the news agencies affiliated to the IRGC and its terrorist Quds Force (Fars and Tasnim) and web sites affiliated to the MOIS in a coordinated and concerted way, rehashed and propagated these lies and absurdities.

The IRGC and the MOIS had fabricated a series of lies, photos, and videos to claim that Saeed Karimian had been collaborating with the PMOI on TV productions, had grown up in Camp Ashraf as a child, and was raised there. They had also claimed that his father was one of the martyrs of the Eternal Light operation who had secretly taken all his family to Camp Ashraf. None of these claims are true. These absurd and blatant lies had actually been denied by Saeed Karimian on November 29, 2012.