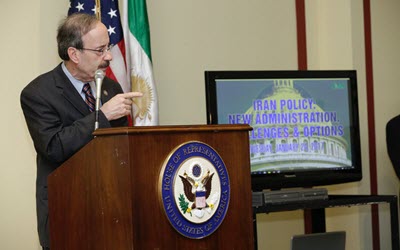 Speaking on Tuesday January 24 at a briefing held in the U.S. Congress, Eliot L. Engel, the Ranking Member on the House Foreign Affairs Committee, condemned the Iranian regime’s behavior in the region particularly in Syria.

Congressman Engel told the audience that members of congress – both Democrats and Republicans – are all united and “we won’t stop until we see a free Iran and we won’t stop till we’re able to walk down the streets of Tehran arm in arm in a new democratic Iran.”

Speaking about the Iranian regime’s Revolutionary Guards (IRGC) and the nuclear deal said: “They are horribly evil and we’ve had enough of evil around the world.”

“The illegitimate government of Iran came to the table to negotiate because the sanctions that we in Congress put into place were hurting them. They didn’t have any money, the Rial, the currency was worthless, their economy was in the toilet. That’s how bad it was. They couldn’t function. They didn’t have any money for things that you know is a new young population in Iran. They couldn’t help a young population. No money at all. They needed these negotiations. But even though Iran had no money and its own people were starving, Iran still found enough money to be the number one leading state sponsor of terrorism in the world.”

Congressman Engel expressed his pleasure for the safe resettlement of members of the Iranian opposition to Albania form Camp Liberty in Iraq for which he “worked behind the scenes to speed up the process and make sure that every last person at Camp Liberty was allowed to leave free and safely.”

The Democratic U.S. Congressman from New York urged the government of Iraq “to honor its commitment and return” to the members of the Iranian opposition, the People’s Mojahedin Organization of Iran (PMOI / MEK) the money for $500 million of assets in Camp Ashraf and $50 million of assets at Camp Liberty to pay for their expenses in Albania.

He said: “As all expenses in Albania are paid by MEK and they need their money to be returned as soon as possible. It’s only fair and it’s only right.”

Congressman Engel said that when an audio tape surfaced in August 2016 of the regime’s former deputy supreme leader Ayatollah Hossein-Ali Montazeri talking about mass executions of MEK members and other opponents of the Iranian regime back in 1988, it showed that “everything that the MEK has been saying has been proven to be true, and so we’re going to be helping the people of Iran.”

“Those of us in Congress that have worked with you are committed to not stopping until the Iranian people are totally free and one day we’ll stroll together in a free and independent Iran which cares about its people, not oppresses them.”

Previous articleIran: The Unprecedented Financial Corruption of $ 3 Billion
Next articleIran Regime’s Judiciary Has Been Profiting From Bank Deposits