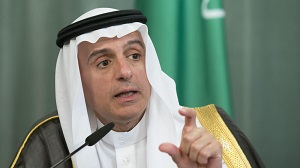 Saudi Arabia announced late Sunday that it would officially sever ties with Iran after having two of its diplomatic posts attacked in the Islamic republic.

He also accused Iran of having a long-track record of violating diplomatic missions, and called Tehran a regional menace for its smuggling of arms and explosives and its harboring of Al-Qaeda militants since 2001.