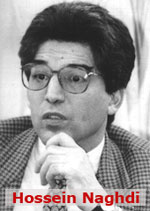 TerrorismCourt hearing over the assassination of Mohammad-Hossein Naqdi, representative of the NCRI in Italy, ended its second session in Rome’s Criminal Court on May 30.
The prosecutor briefly read out the indictment and explained the role of the clerical regime in assassination of its opponents in other countries including Germany, Switzerland and France.
Carlo Tavermina, one of the defense lawyers said that the main reason for Naqdi to be a target was his extensive activities to expose human rights violations in Iran and terrorism by Tehran regime.
Mrs. Ferminia Morouni, widow of the late Naqdi said to the court that her husband departed from the regime for its shocking abuses of human rights and increasing pressures on political refugees and activists. She added that Naqdi was threatened repeatedly either by telephone or directly by agents of the regime and he reported to Italian officials but they never took him seriously. She emphasized that he was a victim of appeasement policy towards the clerical regime which provided its terrorist agents the opportunity to commit this criminal act.
Italian dailies reported the court hearing and Il Tempo newspaper, May 31, carried Ferminia Morouni’s accounts of her husbands last days and wrote: “A few days before his assassination when we were walking in the street in the evening we both noticed there were two men with strange beards like members of the Hizbollah. This caused concern for both of us until it was March 16, 1993. On that day he appeared as if he did not want to leave home. It was 8:30 in the morning and I asked him what was the matter and he said nothing and left. An hour later at 9:30 I received the news of his assassination. Two armed men shot him in his car.
Next hearing will be held on July 15.