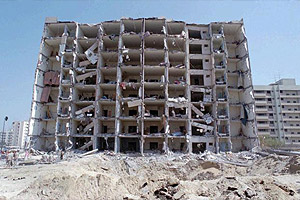 NCRI – More than 19 years after the Saudi Hezbollah detonated a 25,000-pound TNT bomb that killed 19 U.S. airmen at Khobar Towers in Saudi Arabia, the pan-Arab daily Asharq al-Awsat said on Wednesday that Riyadh had apprehended Ahmed al-Mughassil, a key terrorist linked to the attack. But who is the real mastermind behind the deadly terrorist attack?

In a press conference in Washington, DC on April 16, 1997, the National Council of Resistance of Iran (NCRI) revealed that the Khobar Tower bombing was ordered and planned by the Iranian regime’s Islamic Revolutionary Guards Corps-Qods Force (IRGC-QF).

According to the NCRI, which had obtained a series of reports from the sources of the main Iranian opposition group People’s Mojahedin Organization of Iran (PMOI/MEK) inside the country, the bombing in the Saudi Arabian city of Dhahran was a joint operation of the Iranian regime’s Intelligence Ministry (MOIS) and the IRGC.

The NCRI detailed the chain of command that was implicated.

According to the NCRI information, the Qods Force’s 6th Corps that is responsible for carrying out terrorist and subversive operations in the Persian Gulf region carried out the operation.

The decisions for terrorist operations, including the Khobar Tower bombings, were made at the Iranian regime’s Supreme National Security Council (SNSC) chaired by at the time by the regime’s President Ali Akbar Hashemi Rafsanjani.

The current president of the regime Hassan Rouhani was at the time the Secretary of the SNSC and Supreme Leader Ali Khamenei’s representative in this body.

Former FBI director Louis Freeh, who personally oversaw the U.S. investigation of the attack, later confirmed the role of the Iranian regime. Writing in the Wall Street Journal on June 23, 2006, Mr. Freeh said “the Saudi Security Service had arrested six of the bombers after the attack. As FBI agents sifted through the remains of Building 131 in 115-degree heat, the bombers admitted they had been trained by the Iranian external security service (IRGC) in the Beka Valley, and received their passports at the Iranian Embassy in Damascus, along with $250,000 cash for the operation from IRGC Gen. Ahmad Sharifi.”

“We later learned that senior members of the Iranian government, including Ministry of Defense, Ministry of Intelligence and Security (MOIS), and the Spiritual Leader’s office had selected Khobar as their target and commissioned the Saudi Hezbollah to carry out the operation,” he added.