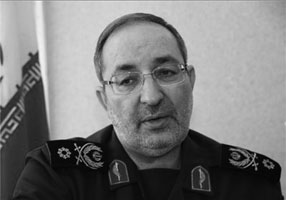 NCRI – The Iranian regime’s Revolutionary Guards Corp has created several Sunni, Shiite and Christian ‘youth organizations’ in Syria so they can receive the clerical regime’s message ‘more explicitly’ and in the near future ‘devote their life’ to it.

Hamadani said the IRGC has succeeded in ‘exporting the culture of sacred war and the establishment of Basij’ in Syria.

His remarks come days after remarks by senior cleric Mehdi Taeb, the head of the so-called “Ammar Garrison”,warning that hardships in Syria, Iraq, Lebanon and Yemen will come in the near future.

Speaking in Qum on Sunday, Taeb, who is inKhamenei’s inner circle, said: “As we move on the hardships will become more and more. The current situation in the world is like a major surgery which Iran, more than any other country, would have a share of this burden and if people do not resist and are not able to tolerate it, this surgery would be a failure.”

During the past week the Iranian regime’s forces in Syria have had many casualties including high ranking commanders.

Hundreds of members of the Iranian regime’s Revolutionary Guards Corp (IRGC) are fighting against opposition forces in southern Syria, according to reports by Syrian opposition sources.

The remains of sixteen Iranian Revolutionary Guards and their Afghan mercenaries who were recently killed while fighting for Bashar Al-Assad in Syria have been buried in Iran in the past few days.

Funeral services for the seven Afghans, identified as Reza Bakhshi, Mohmoud Hakimi, Javid Yousefi, Nematollah Najafi, Ghassem Sadat, Hossein Hoseini and Ali Reza Tavasooli, were held on Wednesday in the city of Mashhad.
Ali Reza Tavasooli, one of the most prominent foreign mercenaries of the Iranian regime fighting for Syrian dictator Bashar Al-Assad was killed on Saturday in the southern province of Daraa.

Mohammad Sahebkaram Ardekani, another IRGC commander, was killed in Syria on March 3 and his remains will be transferred to Iran in the coming days.