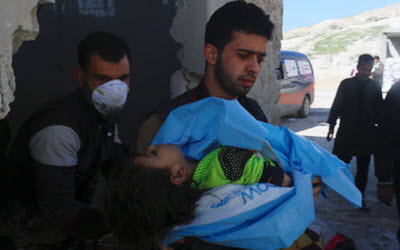 NCRI – Earlier in the week we were once again subjected to media reports showing the terrifying and heart-breaking images of dying men, women, children and babies following a horrific chemical attack that was carried out by the Assad regime in Syria.
As well as the dozens of people that died it has been estimated that over 400 people were left with symptoms of poisoning by sarin gas. As has happened in the past, the cowardly perpetrators of the attack bombed the hospital where the victims (most of whom were women and children) were being treated.

The barbarity of the attack is incomprehensible to most. Now, more than ever, is the situation in urgent need of interventional. Something must happen immediately to stop the bloodshed and the civilian loss of life.

Iran has been involved in the Syrian civil war since the beginning. When Assad was about to be defeated by the opposition, Iran brought in thousands of soldiers to fight for Assad. The Iranian regime has provided billions of dollars worth of support to Assad. The Iranian regime has basically kept Assad in power, for if it were not for its intervention, the Assad regime would have been toppled long ago. Iran has prolonged the war and is responsible for a large number of deaths in the country.

Earlier in the week, Secretary of State Rex Tillerson said: “While we continue to monitor the terrible situation, it is clear that this is how Bashar al-Assad operates: with brutal, unabashed barbarism.” He urged Iran and Russia to stop Assad from using chemical weapons.

In recent weeks, more and more attention has been drawn to Syria and the countries supporting Assad, mainly Russia and Iran who have been receiving international criticism. Social media campaigns have been launched by the public, urging Iran in particular to cease all involvement in the country, with the hashtag #IranOutOfSyria.

Countries in the Gulf have also increased and intensified their condemnations of Iran’s meddling in not just Syria but other countries in the region. They have criticised the role of Iran’s Revolutionary Guards (IRGC) and have slammed the human rights violations that are taking place in the Islamic Republic. Furthermore, Iran’s support for proxy groups has been criticised, as have its nuclear program and ballistic missile program.

It is clear to the international community that Iran has a deadly influence in the region and is central to the issues in the Middle East. One of the most important and urgent steps that needs that needs to be taken is to evict Iran from Syria.

Previous articleIraq: Disturbing Confession by Hashd Al-Shaabi Commander Confirms It Is a Proxy of Iran
Next articleIran: Worn-Out Schools Threatening Lives of Students