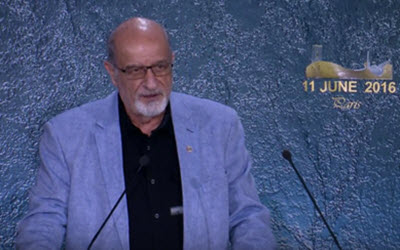 Haitham al-Maleh, chairman of the legal committee of Syria’s democratic opposition coalition, has written an op-ed on the solution to the Syrian crisis. His op-ed was published on Wednesday by The Hill. The following is the full text of the article:

Stop settling for ‘lesser evils’ in the Middle East

On June 11, I participated in a major gathering between officials of the National Council of Resistance of Iran, and fellow officials from the Syrian resistance. The two groups mutually affirmed their common cause in the struggle against Syrian dictator Bashar al-Assad and his devoted patrons in Tehran. Both dictatorships are dependent on each other for their continued hold on power in their own countries and in the region. But conversely, the victory of the resistance in one country or the other will contribute to the liberation of both, and the promotion of greater stability throughout the Middle East.

In the meeting, my colleague Dr. Nasr al-Hariri, the former Secretary General of Syria’s National Coalition, spoke very straightforwardly about the interconnectedness of these two conflicts. He stated that the Iranian regime is clearly fearful of the consequences of its defeat in Syria. There is little doubt that the mullahs recognize that the loss of political and military influence beyond their borders will provide an opening for the Iranian people and NCRI to challenge a weakened regime and facilitate its overthrow.

The prospect for the overthrow of Iran’s fundamentalist Islamic theocracy gives even greater meaning to our own struggle in Syria. The end of that regime would be an avowedly positive thing not just for the Iranian people and not just for the Syrian people who are suffering under Iran’s destructive influence, but also for the whole of the world.

Iran, after all, is well-recognized as the world’s foremost sponsor of terrorism. That title has been reaffirmed over and over again during the course of the five-year Syrian carnage by Assad and the civil war in Yemen. In my country it prevented the overthrow of a government that has systematically repressed its own people, even to the point of deploying chemical weapons against them.

It appears to be generally understood among military analysts that if not for Iranian and later Russian involvement in Syria, the Assad regime would have been forced out of power long ago. Early and effective confrontation of Iran’s regional influence might have saved many of the more than a quarter million of my fellow Syrian countrymen and women who have died in the prolonged conflict.

Perhaps more important to the world beyond our borders is the fact that keeping Iranian forces and Iran-backed militants in their own territory would have gone a long way toward preventing the rise of the Islamic State in our country.

Indeed, some Western policymakers seem to have been approaching the crisis as the choice of whatever they perceive as the lesser of two evils in the competition between the Iranian-backed Shiite extremists and the Sunni ISIS extremists. And with the Islamic State dominating global headlines for so long, to some in the West Shiite Iran was widely regarded as the less harmful ally of convenience. This goes a long way toward explaining NCRI President Maryam Rajavi’s assessment of the situation when she said that global powers were either standing on the side of the murderous Assad or remaining passive in the face of persistent death and destruction.

But I believe our allies in the NCRI have had the same response to that situation as we have in the Syrian opposition. We have remained hopeful that the US, the European Union, and other leading world powers would not be able to go on for very long before realizing that the choice of the lesser of two evils is no choice at all.

Now it looks as though the day is approaching when Western policy will change for the better, and will truly begin to reflect the earnest need to confront both the Shiite and the Sunni sides of the extremist takeover of our country. Less than a week after our meeting with the NCRI, 51 US diplomats used internal cables of the State Department to express strong dissent with the White House’s policy on Syria and to urge airstrikes and other direct action against the Assad regime.

If our June 11 meeting had any impact on foreign observers, it will probably pale in comparison to what emerges after the NCRI hosts Syrian opposition officials again, this time at a major international gathering of “Free Iran” in Paris, on July 9. In it, leading figures from both opposition movements will speak to tens of thousands of supporters and to the global media about the interconnectedness of the Syrian and Iranian struggles for liberation, and their potential to influence the future of the Middle East as a whole.

But more than that, the event will also be attended by dozens of experts and policymakers from the US and Europe, who can be expected to not only express solidarity with our resistance movement but also to further press their own governments to end their passivity and do something to support our cause. Change in Syria and Iran is within reach, but the West should pay heed to cries for freedom in the both countries by the Iranians and Syrians and say goodbye to tyrants that rule in Tehran and Damascus. Is this too much to ask from the world community?