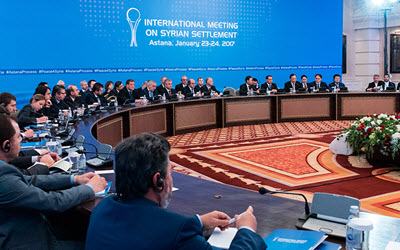 Ahmad Ramadan, Chairman of media and public relations of Syrian National Coalition, talks in his interview with Sky News on May 6 about this problem and the importance of the note the opposition representatives offered in this regard:

The note the Syrian opposition offered to parties participating in the negotiations, particularly the Russians, Turks, Americans, as well as observers from other countries, maintains that there’s a big, deep problem here. While we’re on the eve of the 4th round of Astana talks, the ceasefire has not yet been implemented and the bombings, in which the Russians are also involved, are still underway. “But the second point that has turned into a big problem for us is related to the Iranian regime”, he added, “The Iranian regime is not part of the solution. It’s impossible for the Iranian regime to be part of any monitoring mechanism, so that it turns its militias in Syria into a peace-keeping or ceasefire-monitoring force.”

“The Iranian regime-backed militias are those who are involved in forced, widespread migration of Syrian people”, said Ahmad Ramadan.

On the decision to suspend participation of the opposition in Astana talks, Chairman of media and public relations of Syrian National Coalition said “the opposition delegation has not pulled out of the negotiations; it has only suspended its participation, expecting real, serious commitment to the ceasefire particularly from the Russians.”

“We had a meeting with Friends of Syria Group”, he added, “we told them that it would be unacceptable to offer the Revolution delegation documents and plans during the negotiations, putting them under pressure to agree with them quickly while the Revolution’s political umbrella, namely the National Coalition and Senior negotiators, have not the possibility of reviewing them.”