NCRI – The National Council of Resistance of Iran’s U.S. Representative Office hosted a panel of experts on March 8, 2017, to discuss the IRGC’s growing influence, and global options that may be used to mitigate the threat. A book prepared by the NCRI-US was also released, “Iran: The Rise of the Revolutionary Guard’s Financial Empire.” The book documents the way the Supreme Leader and the IRGC have taken over the Iranian economy, and how those profits are being used to fund terrorist networks. 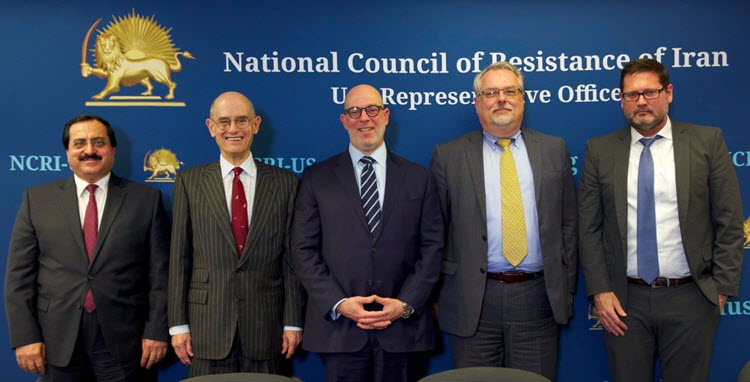 In Iran, ownership of property in various spheres of the economy has gradually shifted from the population at large, to a minority of the ruling elite, according to the report. This minority is comprised of the Supreme Leader’s office and the IRGC, using 14 powerhouses. The report summarizes it this way, “The driving force behind all major economic developments have been the expansion of the sphere of influence of Khamenei’s office and the IRGC over the country’s economic resources, in order to intensify suppression, support terrorism, and advance the nuclear program.”

“Privatization” in this case means that a significant number of Iran’s economic institutions have been handed off to the Supreme Leader and the security, military, and economic groups under his influence.

The study found that a small number of IRGC affiliates and Khamenei aides gain easy access to low-interest loans, many of which have never been repaid, resulting in a financial crisis in its own right.

Iran’s economy has not experienced the renaissance many anticipated, with regards to the 2015 Nuclear Deal. Marked improvements have not materialized and in reality, the control of the regime over the entire economic systems and the astonishing growth of extremely disruptive and obstructive rules and regulations severely limit freedom of action. This leaves little or no room for free-market competition in Iran. Two-thirds of Iran’s total industrial capacity has either vanished or remains idle, according to analysts’ estimates.

Negatively impacting the Iranian economy is not the only way Supreme Leader and the IRGC affect the situation in Iran. Their financial empire is also used to export terrorism. Up to $100 million a year has been spent on salaries for mercenaries sent to Syria under the direction of the notorious Quds Force.

There is a two-fold purpose for the study. The first is to document a major money grab by the Supreme Leader and the IRGC. Secondly, it is a warning to the West. Investments in the post-Joint Comprehensive Plan of Action in Iran are not likely to invigorate the Iranian economy, but are more likely to enrich the IRGC and fund terrorism.

Alireza Jafarzadeh, deputy director of the dissident group’s Washington office said, “The book is intended to show that, behind the veneer of the official banks and seemingly benign companies, lies a web of institutions controlled by the Supreme Leader Ali Khamenei and his ideological terrorist arm, the Revolutionary Guard Corps. According to the book, foreign investors cannot in practical terms avoid entanglement by affiliation in the Iranian regime’s behavior, including its support for terrorism, continued aggressive policies towards regional countries, manufacture and testing of ballistic missiles, and systematic egregious human rights violations inside Iran.”

Dissidents have criticized the nuclear deal of 2015, saying that it has further emboldened Iran, instead of moderating its leadership. The book says, “International sanctions were never the cause of Iran’s economic ills, which is why their lifting has not provided the cure. There are systemic, entrenched forces at play that have to do with the nature and sociopolitical roots of the political system in power today.”

As described by the panel, Iran’s current economy won’t bring an improvement to the Iranian population, but will continue to fund Iran’s expansion of fundamentalism and terrorism throughout the region and within the global community instead.

Previous articleThe Message of Maryam Rajavi to a Meeting at the U.S. House of Representatives
Next articleCall to Blacklist Iran’s Islamic Revolutionary Guard Corps (IRGC) and Their Affiliated Militias