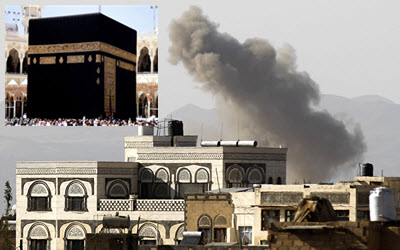 NCRI – The Arabic countries condemned the rocket attacks of Mecca by Houthi Militants affiliated with the Iranian Regime.

The board of Muslim scholars stated that the Houthi militias and the ousted president of Yemen, Ali Abdullah Saleh ended the black history unfavorably.

The Persian Gulf Cooperation Council, Bahrain, UAE and Qatar condemned the Houthi militias for firing a ballistic missile from Yemen to Mecca.

UAE Foreign Minister, Abdullah bin Zayed said that the Iranian regime supports the militants who targeted Mecca with a missile.

On the other hand, Bahrain fiercely condemned the acts of militants in Yemen who launched a ballistic missile toward Mecca.

Bahrain’s official statement reads:”to target a holy city is a provocative measure against the Muslims of all regions and it is a criminal act that has transcended all religious, ethical and humanistic limitations.”

The Foreign Ministry of Qatar also issued a statement condemning the launch of a ballistic missile toward Mecca. The statement condemns the missile attack by the Houthis and calls them as offensive and provocative measures against the millions of Muslims in the world.

Meanwhile, the Saudi Minister of Foreign Affairs, Adel al-Jubeir stated that the Houthi militias and Ali Abdullah Saleh are backed by the Iran’s regime and they do not hesitate to target the Holy City of Mecca, the Qibla of Muslims.

Kuwait’s government also strongly condemn the Houthis’ attack on Mecca and in a statement announced that this act was an insult to the beliefs of the Islamic Ummah and it hurts the feelings of all Muslims in the world. It is also a desecration to the Qibla of Muslims.

The Jordanian government slammed the Houthis that mounted a coup and attacked Mecca.

The Minister of media affairs and the official spokesman of the Jordanian government, Mohammad al-Momani said that violating the sanctities of Islam will not prevail peace rather it sets the whole region on fire.

The Egyptian government along with other Arabic countries strongly condemned the Houthis’ attack to Mecca and addressed it as an unacceptable measure. The Egyptian Foreign Ministry issued a statement stating that the Houthis’ measure was a dangerous, unprecedented and insulting one that we should not fall silent about it.

The Sudanese government also fiercely condemned the rocket attack of Houthis to Mecca. Khartoum in a statement announced that these heinous acts by Houthis will not benefit Yemen at all; rather it arouses the emotions of the Muslims.

Palestinian government also condemned the Houthis Attack on Mecca and called this measure as a “cowardly and disrespectful act and out of the ethical framework of Islam”.

Morocco’s Foreign Ministry on Friday condemned the Houthis brutal and violent measures and addressed them as an offensive measure that irritates the Muslims and it harms the peace and stability of the region.