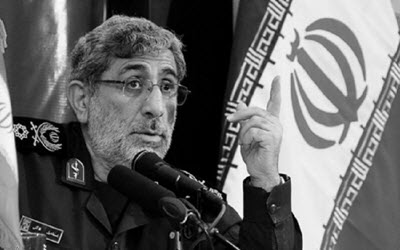 NCRI – The Deputy Commander of the terrorist Qods Force affiliated with IRGC referred to the Iranian regime’s involvement in the Syria’s Civil War as well as the participation of the regime in slaughtering the people. He called this year as the year of destiny for the regime and said:”in the current year, destiny only determines the result of this Civil War in Syria. This war requires commanders who can impose the will of the Iranian regime to the enemies.”

On Saturday 5th November 2016, ISNA News Agency affiliated with the Mullahs’ regime reported that the Deputy Qods Force Commander, Esmail Qaani uttered these remarks at the commemoration of one of the commanders of IRGC in Syria, Hossein Hamedani , in the Military University of Imam Hossein.

Esmail Qaani called the Syrian Civil War as a fundamental battle for the regime. He implicitly addressed the Iranian Revolutionary Guards Forces and those who were deployed to Syria that this war requires very strong and firm people who attend on the battlefield and fight with all of their dignity.

He also admitted that the regime is stuck in a swamp of Syria and added:”of course this war will continue and it will not simultaneously end with the incidents of Iraq and Syria since this war is based on identity and existence and it will continue. Today the Syria needs the commanders who can impose the will of the Islamic Republic of Iran to their enemies. It is actually a significant character that each commander of the Assad’s regime should have.”

These comments were of the most explicit ones on the position of Iran in the conflicts of Syria.

The Deputy Commander of Qods Force implicitly acknowledged that the plans of the Syrian regime have been failed and said:”the enemies made an effort to break our will. We could not fulfill the IRI’s will unless our commanders resisted. I appreciate the commander Hossein Hamedani who did not withhold any attempt to fight with the enemies in the Syrian war. By the time he was appointed as the commander of the Advisory Forces in Syria, the situation in Syria was so critical that an airplane was targeted with a shell while landing at Damascus Airport. The Takfiris Forces fired the presidential palace with shells and they have marched until the back of the Iranian Embassy in Syria.”

Several media outlets, including the Guardian, reported that Hossein Hamedani was killed in Aleppo in October 2015 and this incident indicates the growing support of the IRI for the Assad’s regime. Previously, the Commander of Qods Force, Brigadier General Qasem Soleimani issued a statement to Basij and IRGC forces and asked them not to pay attention to some criticism which has been expressed to his policies as well as the role of IRGC in Syria and other regions.

Khamenei personally directs the operations of Qods Forces outside the borders and the Iranian regime avoids releasing any information to people on the number of death tolls and the amount of money spent on the war. Nevertheless, the statement of the Commander of Qods Force, as well as the remarks of his Deputy Esmail Qaani, signify that Iran’s meddle in the Syrian Civil War is even criticized by some military commanders and political authorities in the country.