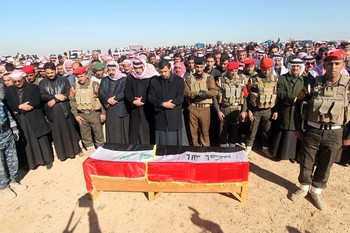 The killing was done to suppress the popular uprising in Iraq

NCRI – The Iranian resistance strongly condemns the murder of Ayfan Saadun Al-Essawi, member of the Iraqi Parliament from the Al-Iraqiya coalition, as a means to suppress the widespread popular uprising by the Iraqi people and sends its condolences to the family of al-Essawi, the people in al-Anbar province, to the Iraqi Unity Front lead by Ahmad Abu-Risheh, and the al-Iraqiya coalition.

Mr. Ayfan Saadun Al-Essawi had participated in the anti-government demonstration in Fallujah and was one of the staunch opponents of the Iranian regime’s interference in the internal affairs of Iraq. Prior to his death in an interview with al-Arabiya TV he had stated that “closing the Tarbil border crossing (located between Iraq and Jordan) is disastrous for us. I think this action is meant to pressure the people of al-Anbar and is considered an act of war against the Sunnis and the al-Anbar Province.”

Eifan Saadoon had always supported the residents of Camp Ashraf and the People’s Mojahedin of Iran (PMOI/MEK) and was one of the 133 members of Iraqi Parliament who recently had written a joint letter to the Secretary General of the United Nations supporting the residents stating that:

“The residents of this camp [Camp Liberty] are political refugees and are considered ‘Protected Persons’ under the protection of international laws…. It is necessary that all sanctions and limitations imposed on Camp Liberty be lifted…. The residents should also enjoy the right to freedom of movement outside the camp, and the right to see lawyers, MPs and foreign delegations” and they “must be able to – without restrictions – sell their property inside Iraq or to companies outside Iraq or to transfer them to any location.

The133 MPs called on the Secretary General “to guarantee the rights of these refugees based on international and human rights standards “and “ to recognize this camp as a refugee camp under UNHCR supervision.”

Ayfan Saadun Al-Essawi and the other Iraqi patriots, who had always opposed the Iranian backed dictatorship in Iraq, were continuously receiving threats from Iranian regime’s terrorist Qods Force and their Iraqi affiliates.

On Monday January 1, 2013 Sheikh Mohammed Taher Abde Rabeh, the head of the Al-Jabbour tribe was killed in the Ninawa province of Iraq.

Secretariat of the National Council of Resistance of Iran
Jan 16, 2013