The Uprising in Iraq: Collapse of Iran Regime’s Strategic Depth After Soleimani’s Elimination 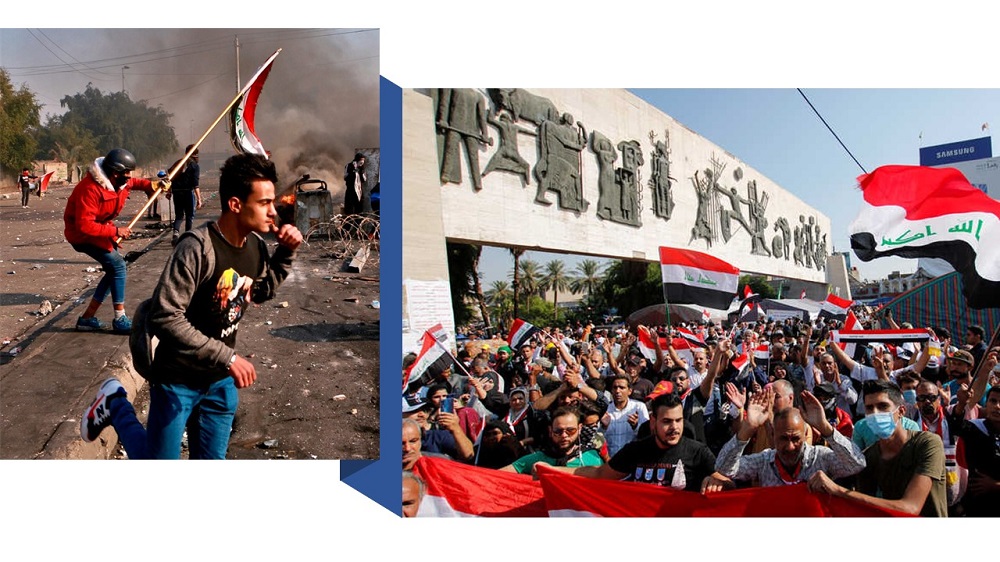 Iraq Protests: The main goal of the protests is to free their country and to end the Iranian regime’s deadly meddling in Iraq

A nationwide uprising erupted in Iraq in early October and has continued ever since. These protests are against corrupt politicians who have been leading one of the wealthiest nations in the Middle East to absolute devastation.

The main goal of the protests is to free their country and to end the Iranian regime’s deadly meddling in Iraq. For years the Iranian regime described Iraq, Syria, and Lebanon as its strategic depth. Now after the elimination of its Revolutionary Guards (IRGC) Quds Force commander, Qassem Soleimani, and the continuous protests in Iraq, particularly in the southern provinces of Iraq with the absolute Shiite-majority population, the regime’s strategic depth is about to collapse.

These protests continue in Iraq simultaneously with nationwide Iran protests which have shaken the regime’s pillars of existence.

AFP reported on January 22: “Roads were cut, and government offices closed across the Shiite-majority south too, including the holy city of Najaf and the cities of Al-Hillah and Diwaniyah.”

Since its foundation in 1979, the Iranian regime has been based on two pillars: domestic oppression and export of terrorism and chaos abroad.  A country like Iraq, with the Shiite-majority population, was the regime’s first target in its campaign to impose its hegemony over neighboring countries. For this reason, Ruhollah Khomeini, the regime’s founder, continued the Iran-Iraq war for eight long years.

The U.S. invasion of Iraq paved the way for the Iranian regime to secretly occupy Iraq.  The Iranian regime’s ambassador to Iraq, Iraj Masjedi, has been acting as Iraq’s secret governor. Soleimani and Masjedi played a key role in suppressing the Iraqi people’s uprising and killing innocent civilians by using regime’s proxy groups such as the Badr Brigades, Kataib Hezbollah and the Popular Mobilization Forces (PMF).

For this reason, Iraqi people, especially in the southern provinces of the country, are setting fire to the posters of Qassem Soleimani and Abu Mahdi al-Muhandis the now-dead head of PMF. They have also repeatedly attacked the regime’s consulates in the southern cities of Basra and Najaf.

As the protests escalated in Iraq, the Iranian regime tried different tactics to control the situation.

First, it wanted to divert the protests toward the U.S. and cause rifts among the protesters.

Secondly, the regime wanted to exhaust and intimidate the protesters by making hollow promises and wasting time on the one hand and attacking and killing protesters on the other. Yet the Iraqi protesters responded: “Resistance and patience” and “[The enemy] will tire, but we will not.”

After 17 years of trying to occupy Iraq through brutal measures and the export of terrorism, the Iranian regime has lost its strategic depth. The increased awareness of the Iraqi people and parallel uprisings in Lebanon and Iran are among the main causes of the regime’s waning power in this country. On the other hand, the elimination of Qassem Soleimani has terrified the regime’s proxy groups in Iraq.