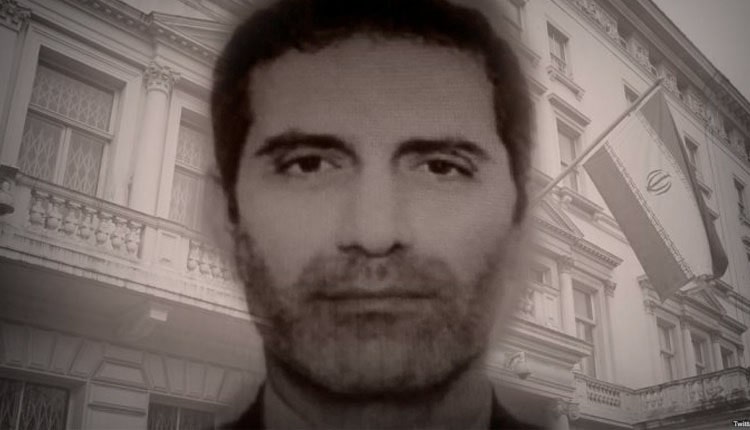 Le Monde on October 10 quoted Belgian authorities as saying that Iran’s incarcerated diplomat-terrorist Assadollah Assadi was acting under the direction of the Iranian state in the 2018 foiled bomb plot against the Iranian opposition rally in Paris. This indicates that the action constituted state-sponsored terrorism.

“On February 20, Jaak Raas, head of the [Belgium] intelligence service, wrote to the federal prosecutor at the time that ‘the proposed attack was conceived in the name of Iran, and under its leadership; it was not a personal initiative by Assadi,’” read the article.

Assadi has held top positions in the regime. Thus, his involvement in this terrorist attack was not a personal decision or initiative. In this regard, Le Monde writes: “Assadolah Assadi is the central figure in this case. The 49-year-old was a diplomat in Iraq from 2003 to 2008, before being appointed third secretary at the Iranian embassy in Vienna in 2014. According to the State Security, he mainly acted on behalf of ‘Department 312’, a service of the Ministry of Intelligence and Security (MOIS) which is on the list of organizations classified as terrorist by the European Union.”

On July 1, 2018, Germany arrested Assadi before he entered Austria, where he served as the third secretary at the regime’s Embassy. Prior to Assadi, three other terrorists, in Belgium and France were arrested. The terrorist couple arrested in Belgium were en route to Paris to attend the annual “Free Iran” gathering of the National Council of Resistance of Iran (NCRI). This terrorist couple, Nasimeh Naami and Amir Sadouni were carrying 500 grams of TATP explosives. Assadi had personally delivered explosives to his operatives in Luxembourg to carry out the operation.

In this regard Le Monde wrote: “Belgian experts are categorical: the shock wave caused by the bomb could have extended over a hundred meters, claiming numerous victims and creating a potentially fatal panic movement given the number of people present.”

This event was attended by the NCRI’s president-elect, Mrs. Maryam Rajavi, hundreds of renowned U.S. and European politicians, and over 100,000 people.

Infuriated over the successful relocation of members of the People’s Mojahedin Organization of Iran (PMOI/MEK) to Albania, and after the major Iran protests which rattled the regime’s foundations, the mullahs decided to target their only viable alternative.

Recently, it was revealed that Assadi has threatened the Belgian authorities and witnesses with possible terrorist attacks by Tehran’s proxy groups, who he described as closely “following” the result of Assadi’s trial. Assadi stated these groups would retaliate if the court ruling on November 27 was not in Assadi’s favor.

“During his preventive detention, Assadolah Assadi refused to collaborate with the Belgian justice, but he threatened reprisals. On March 9, 2019, he informed the director of Beveren prison that he wished to meet with an investigator. He told him that if he was convicted, ‘armed groups’ were ready to act against police officers, witnesses, or the PMOI supporters,” read Le Monde’s article.

Previously, Mrs. Rajavi testified for seven hours while presenting documents stating that this major terrorist operation was decided by the regime’s Supreme National Security Council headed by Rouhani and approved with the direct order of the regime’s Supreme Leader Ali Khamenei. Mrs. Rajavi stressed that in addition to Assadi and other terrorists arrested as perpetrators of this crime, the actual masterminds, namely Khamenei, Rouhani, Zarif, and Mahmoud Alavi, the Minister of Intelligence, must be prosecuted. This was necessary to stop the unbridled terrorism of the mullah, she said.

On October 10, the NCRI in its statement regarding Assadi’s threats wrote: “The European Union must strongly condemn the clerical regime’s terrorist threats, which are designed to obstruct the judicial process in Belgium. Silence and appeasement will further embolden this regime to carry out assassinations, commit crimes, and engage in blackmail. Experience has shown that the only effective policy to counter the unbridled terrorism of the ruling mullahs in Iran is to adopt a decisive approach. The closure of embassies and the trial and expulsion of mercenaries and intelligence agents of this regime, operating under any cover, is the first necessary action to counter the mullahs’ terrorism. The use of terrorism to obstruct the judicial process increases the need to expel the regime’s representatives and close its embassies and missions.”