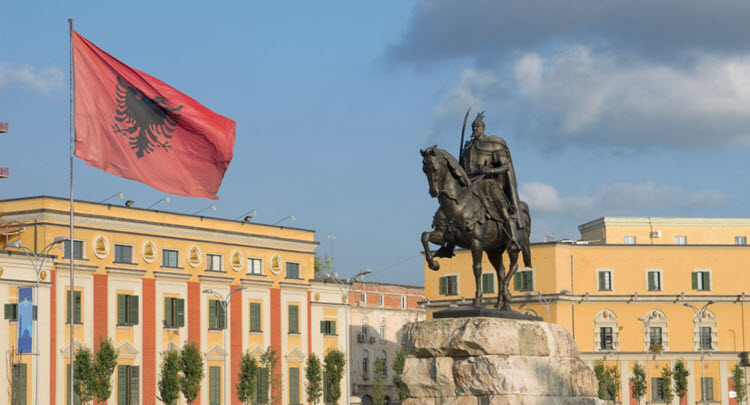 NCRI – Albania’s media reported on March 22, 2018 that two Iranians were arrested on the charge of terrorism in Tirana. On Thursday morning, two Iranian nationals suspected of terrorist activity were arrested outside the Bektashi World Center just before the celebration of the Iranian Year (Nowruz) began.

The two Iranians were arrested by the intelligence services and the counterterrorism unit of the Albanian police. The suspects, identified by their initials as 65 years-old F.Z. and 59 years-old S.M., were taking photos at the moment of their arrest. They told the anti-terrorism police and other officers that they were journalists and they had come there upon the invitation of the Bektashi World Center.

“According to preliminary information, these two Iranian nationals arrived to Albania in the past few days via the Rinas International airport and passed the security check point without any problem. The two Iranians were detained for further investigation by Albanian anti-terrorism agencies, following the information received from international partners, they were willing to carry out terrorist work in our country,” according to Albani’s media.

Albanian media under the title of “watching 10 suspected terrorists” added: “Since early March, intelligence and counterterrorism agencies have monitored 10 individuals who allegedly could organize terrorist activities in Albania. All Iranians entering Albania are under the control during the time at the border and during their stay in the country. Law enforcement agencies in the country are particularly concerned about Iranian people who may be used by Tehran’s secret services to take steps to hurt the protection of 3000 Iranian Mojahedin refugees in Albania.”

In connection with the plot of the clerical regime against the Mojahedin in Albania, the statement by the Secretariat of the National Council of Resistance of Iran (NCRI) on 13 March 2018 disclosed details of the Iranian regime’s intervention in Albania and wrote that the clerical regime’s Ministry of Intelligence and their agents at the regime’s embassy in Albania under the framework of cultural activities and meetings in Tehran and Tirana, as well as by employing their mercenaries in the country, are attempting to plot and disseminate information against the Iranian Resistance and the PMOI in Albania. This is while the mullahs’ regime is besieged by unrest, protests and strikes all over the country, and it needs more than ever a conspiracy against its main opposition.

Struan Stevenson, a former Member of the European Parliament(MEP) and coordinator of the Campaign for Free Iran, also issued a statement March 15, 2018, titled “A Conspiracy Against the Iranian Opposition under the foil of Celebrating the freedom-loving Albanian poet”, while listing some of the regime’s actions against the Mojahedin in Albania, concluded: “Given the above, and given that the Iranian regime is deeply upset about the very positive interaction of the PMOI with the Albanian people and government, the Albanian government should prevent such measures by the Iranian regime’s intelligence services against the PMOI and the recruitment of some Albanian citizens by the Iranian regime, and it should not allow the theocratic regime to disturb peace and security of the PMOI in this country..”