U.S. Calls Iran Regime out on Its Malign Meddling in Iraq 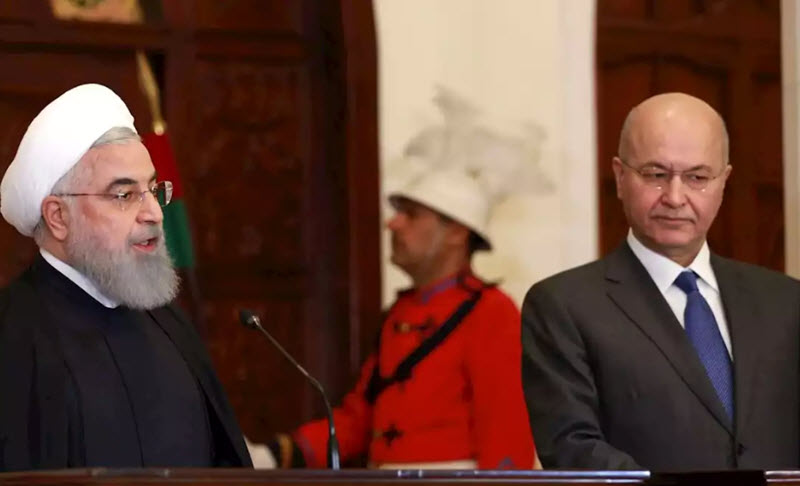 The Iranian regime has been interfering in the internal affairs of other nations for years. It has been heavily involved in the Syrian civil war and has fuelled chaos in Lebanon. Its interference and meddling in Iraq has been a major concern for the international community for quite some time.

Iran regime’s president Rouhani recently visited Iraq and the international community, in particular the United States, has been questioning Iran’s reasons for being there. During his visit to Iraq earlier this week, Rouhani met with his Iraqi counterpart – President Barham Salih.

Officials in both Iran and Iraq have said that the purpose of the three-day visit has been to formalise trade relations. The Iranian delegation included dozens of business people and a number of preliminary trade deals have been agreed.

One of the deals is to construct a railway line linking the two countries. They are also said to have eased visa restrictions between the countries.

Rouhani took the occasion to slam the United States for its maximum pressure campaign on the Iranian regime and described the crippling sanctions that have now been re-imposed as “unjust”. He said that he was in Iraq to “develop and deepen our relations to stand against them”.

The United States has been particularly outspoken about its concerns regarding Iran regime’s malign interest in Iraq. Brian Hook, the U.S. Special Representative for Iran, said that Iran is taking such an interest in the country because it wants to take significant control over the Iraqi government. Iran has been fuelling sectarian conflict in Iraq, but the Iraqi people have called on Iran to leave. Hook said that for the sake of the Iraqi people, Iran must stop interfering with the sovereignty and security of the country.

He said that Iran’s motives must be questioned. Hook also said that it is very clear that Iran wants to turn Iraq “into a province of Iran” with the aim of creating “a military highway across the northern Middle East that the Iran Revolutionary Guard Corps can use to ferry missiles and weapons”.

Hook said that the Iranian regime is attempting to “replace a national identity”, in other words, dissolve the current identity and replace it with a Shiite one.

Rouhani, on the other hand, has accused “world powers” of causing the chaos in the region. Rouhani said that instability has been caused by Zionism and “those who want to dominate the wealth of the countries of the region”.

Analysts have said that the Iranian regime is hoping to gain a number of things from Iraq, including the consolidation of relations in a bid to make the regime look stronger than it is.

It has put a lot of time, effort, resources and funds into Iraq and it is going to do everything it possibly can to make sure that these investments have not been for nothing. The United States on the other hand is quite rightly trying to limit the damage by making sure that the Iranian regime’s interference is addressed.