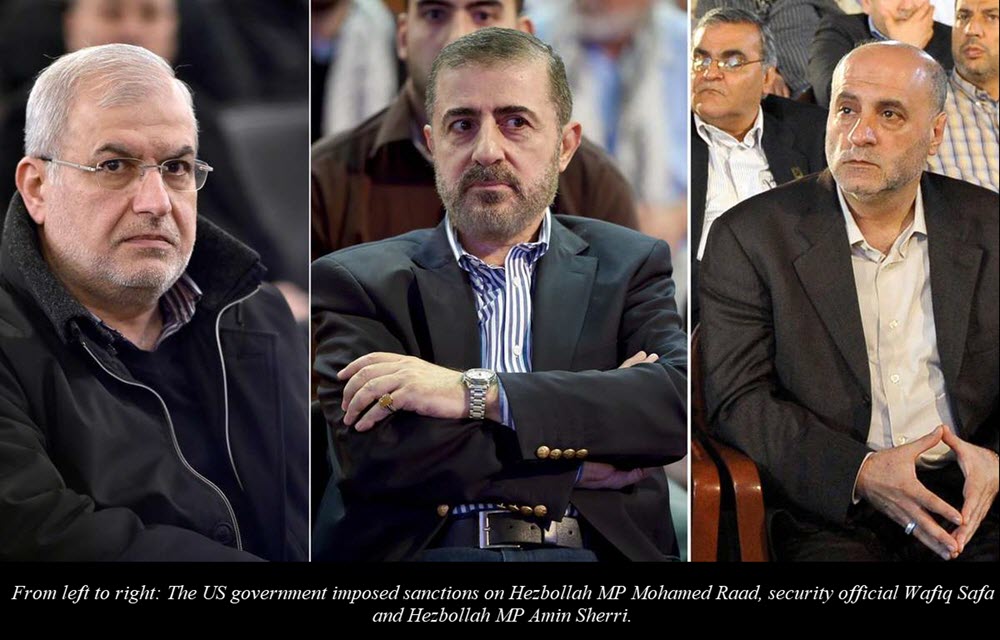 The United States imposed sanctions on three senior Hezbollah officials in Lebanon on Tuesday, accusing them of having a “malign agenda” to support the Iranian regime.

The sanctions were the first to directly target members of Lebanon’s Parliament and underscored the White House’s intention to ratchet up pressure on Iran’s regime by punishing groups with ties to Tehran, The New York Times wrote on Wednesday.

The Office of Foreign Assets Control (OFAC) of the US Department of Treasury said MPs Amin Sherri and Muhammad Hasan Ra’ad, members of the Loyalty to Resistance Bloc, acted on behalf of Hezbollah, which used its parliamentary power in Lebanon to advance its violent activities.

OFAC released a photo of Qassem Soleimani, commander of the Iranian regime’s Islamic Revolutionary Guards Corps (IRGC) Quds Force, with his arm around Sherri’s shoulder. The U.S. State Department added the IRGC to its list of Foreign Terrorist Organizations in April 2019.

The other man blacklisted is Wafiq Safa, a top Hezbollah official close to leader Hassan Nasrallah. The U.S. said Safa maintained the group’s ties to financiers and arranged the smuggling of weapons and drugs.

“Hezbollah uses its operatives in Lebanon’s Parliament to manipulate institutions in support of the terrorist group’s financial and security interests, and to bolster Iran’s malign activities,” Sigal Mandelker, the U.S. Treasury Department’s Under Secretary for Terrorism and Financial Intelligence, said in a statement.

The newest sanctions brought to 50 the number of Hezbollah individuals and entities blacklisted by the U.S. Treasury since 2017.

The move came as Washington steps up pressure on Iran’s regime and its “proxies” in the Middle East, including Hezbollah, which the U.S. accuses of encouraging “terror” attacks.

Senior Trump administration officials said that the sanctions announced on Tuesday were meant to emphasize to the world that the U.S saw no distinction between the political and military wings of Hezbollah, which is supported by the Iranian regime. They urged Lebanon’s leaders to sever ties with anyone affiliated with Hezbollah.

“Hezbollah threatens the economic stability and security of Lebanon and the wider region, all at a cost to the Lebanese people,” Ms. Mandelker said. “The United States will continue to support efforts of the Lebanese government to protect its institutions from exploitation by Iran and its terrorist proxies, and to secure a more peaceful and prosperous future for Lebanon.”

U.S. Administration officials said on Tuesday that more sanctions against Iran were in the pipeline.

In late June, Treasury Secretary Steven Mnuchin said that sanctions targeting Mohammad Javad Zarif, the Iranian regime’s foreign minister, were forthcoming. While they have yet to be announced, an Administration official described Zarif as a figure of key interest and said that additional sanctions were being explored.

Speaking in the Oval Office on Tuesday, President Trump said he was keeping a close eye on the Iranian regime’s enrichment activities.

“Well, we’re going to see what happens with Iran,” President Trump said. “Iran is doing a lot of bad things right now, and they better be very careful.”

Previous articleA Round-Up of the Latest Protests in Iran
Next articleTop IRGC Commander: U.S. Bases Are in Range of Iran’s Missiles