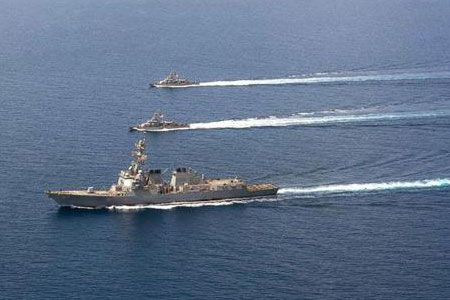 The U.S. military says it is weighing what military response it could take against Houthi group backed by the Iranian regime, who U.S. officials believe launched two missiles at American warships in the Red Sea on Sunday.

Navy Capt. Jeff Davis, a Pentagon spokesman, says the U.S. is gathering details on the incident. He says the U.S. will find out who fired the missiles and “we’ll take action accordingly.” He would not confirm if the U.S. is developing targets for a retaliatory strike.

U.S. officials believe Houthis launched variants of the so-called Silkworm missile, a well-known part of Iran’s military arsenal, at the USS Mason and the USS Ponce. Both missiles fell harmlessly into the water.

“It’s not a secret that Iran has been actively supplying them and giving them the tools of war,” Davis Said.

The U.S. intercepted an Iranian shipping vessel sending vast shipments of arms to the Houthis in April 2016.