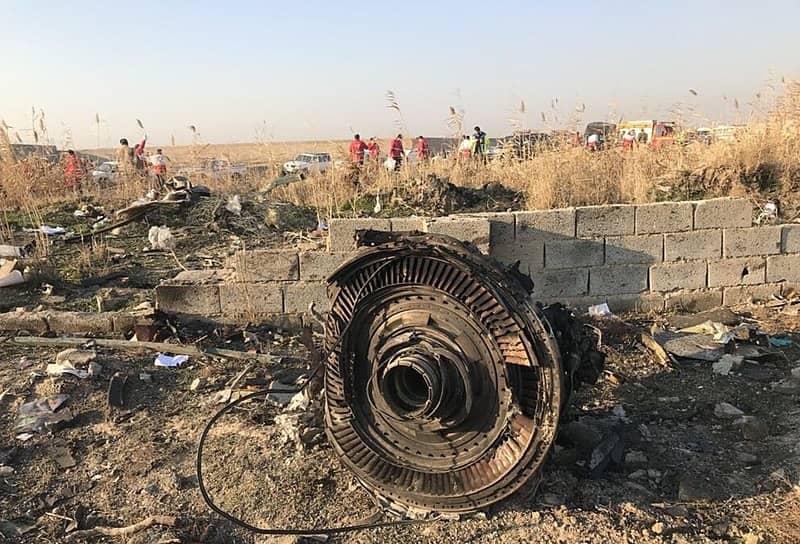 A former Iranian regime official and his wife whose son and daughter were among the 176 176 passengers of the Ukraine International Airlines Flight PS752 that was downed by Iranian Revolutionary Guards Corps (IRGC) missiles in January 2020 said “It was downed to create a human shield” against a presumed U.S. attack.

Mohsen Asadi-lari, a former Acting Minister for International Affairs for Ministry of Health and Medical Education, and his wife Zahra Majd, the parents of Mohammad-Hossein and Zeinab Asadi-lari, said in an interview with Sharg daily on Monday, January 10, that IRGC commander Hossein Salami told them days 40 days after the IRGC shut down the plane that IRGC would have been fighting the U.S. had the plane not been downed.

In a 45 minute interview with the couple on January 8, 2022, Mrs. Majd said: “He [Hossein Salami] came with his deputy. While pretending to be upset, he said I wish I was on that plane and I wish I had gone and… then they said, you know where your children are? They have much higher standing than the martyrs in the middle of the battlefield.”

Mr. Asadi-lari added, “We have actually come to the conclusion that they shot down this [airliner] and we have noted this in [Facebook] pages of our children that they [IRGC] wanted to down it and put the blame on the U.S.  as they had done it before by taking similar actions.”

When the interviewer asked how do you defend your assertion, Majd replied “What defense? They [the officials] say openly that if the plane had not been downed a destructive war would erupted the next day and the lives of 10 million people would have been in danger.”

“These should be put in history [of this regime]” Majd said. “The situation may now be such that you cannot publish what we are saying and unfortunately, the atmosphere is moving towards more and more distortion and stepped-up atmosphere of fear.”

She added that the families of the victims living in Iran sometimes remain silent because of “fear” and do not talk to the media.

The couple also noted that not only were they prevented from entering the crash site in the hours after the incident, but also the regime had not yet delivered any of their children’s belongings, except for Zainab’s burned passport. “Neither the laptop nor even the money they had with them has been returned,” Mr. Asadi Lari said

“How is that possible? It is clear in the photos that even dolls remained, but the electronic devices are gone! It is likely that the information was in our children’s belongings, and in fact, they may have filmed the last moments and they did not want to make that information public. Most families were like this, and perhaps in a few rare cases, they were made available to families, after the information had been erased. These are questions themselves that need to be answered.”

Describing the downing of the plane as an “unprecedented crime” Asadi-lari, stressed that the families had objected to the fact that the court case in Iran was called “the Ukrainian airlines accident investigation”, saying that the tragedy should not be called an “accident” and that the correct name was a crime or at least the word “downing” should be used.

He said the reason the reports by Iranian regime’s authorities on the incident were not made available to the families was because “there are issues that, if clarified, will clearly clarify the contradictions with the facts and other published reports and other claims made so far by the regime.”