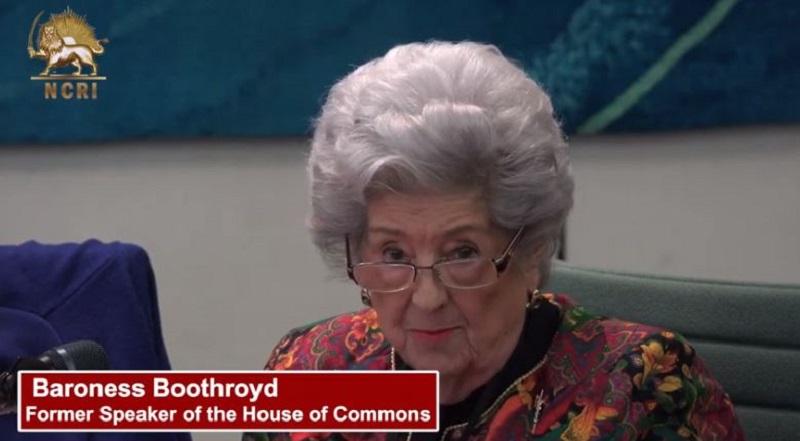 The cross-party Members of the UK Parliaments, Members of the House Lords, prominent jurists and women’s rights activists discussed women’s rights in Iran and the struggle for democratic change at a conference in the United Kingdom House of Commons, on 25 February 2020, on the eve of International Women’s Day (IWD).

The following is the full text of the speech by Baroness Boothroyd OM, former Speakers of the House of Commons.

Although we are early in celebrating international women’s day, which is not until March 8th, I think there is no better candidate for us to recognize and celebrate than the brave women of Iran. And in recent months, I’m sure you’re all aware of this, we witnessed their bravery as they led the wave of national protests against that religious dictatorship, that has forced millions of Iranian hostages for more than decades. And you know women have played the most significant role in Iran’s freedom movement for over a century. And today they have a very inspiring leader who it was my privilege to meet sometime ago, my good friend, Maryam Rajavi who continues to spearhead the struggle against the religious and pernicious dictatorship in that country.

My friends, today I don’t know if this has been mentioned but I think no meeting or conference of this nature can take place without the mention of Iran’s recent election. Now I have to tell you, I was delighted to read a few days ago, ahead of that election, the all that had gone out by Maryam Rajavi for the Iranian people, to boycott that election and to do so on the grounds that many of the candidates who were reformers or moderates were disqualified from having their names on the ballot paper.

If a person opposing the current regime wished to be a candidate, they were disqualified. Not allowed. That’s not democracy. It is making a mockery of democracy; it is a sham and that election was a sham from start to finish. Maryam Rajavi’s call to the people was headed. She got the right response. I was thrilled to see in here on my television screen, young women in the streets of Iran, young women in particular, being interviewed, courageous enough to tell the world that because of disqualification of candidates and they have no choice and so they refuse to be part of an unscrupulous and undemocratic process. I say, three cheers for them!

I was interested also to learn later on that the regime had decided to keep the polling stations open for an extra three hours on voting day because they said there were so many crowds of people who wanted to vote, they had to keep it open for an extra 3 hours because of the crowds. Who did they think they were kidding, what a load of rubbish that was. Less than half the population of Iran voted, the turnout of voters was a little over 40% of the Iranian electorate. The Iranian people headed Maryam Rajavi’s call. They boycotted that election and demonstrated their aberrance of the system under which they are governed.

Now let’s have a look, when I came in here there was mention by my colleague, Baroness Verma of what the UK government, now with a majority, we keep reminded the big majority of 80, I’ve been in parliament since 1978, I don’t think there’s ever been a big majority like that? Here the united government now with this huge majority, must recognize and back the democratic aspirations of the Iranian people. Their organized resistance movement, the NCRI, and the support that Madam Rajavi’s 10-point democratic platform as a viable alternative to the current religious dictatorship. Simply put, our message should be that we recognize that the problems in Iran have an Iranian solution and we proudly support it.

My friends, if any of our comments are being recorded and are shown in Iran, if they get through today or in the next coming weeks, please let it be known to the Iranian people and the Iranian women in particular, we are here in support of them, we admire their courage, and we cheer them on, and do whatever we can to help at this end, and we talk to our own government about it. And I want to end with the words of Maryam Rajavi, as she said this, there is no army, nor any weapon that is more powerful than the democratic aspirations of the Iranian people. My friends, men, and women in Iran are demonstrating that on a daily basis, through them that day will come and Iran will be free. I thank you for listening.