Iran: A dozen women stabbed and injured by Basij in southern city – (Updated) 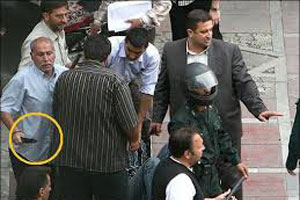 NCRI – A number of young Iranian women, including at least five university students, have been stabbed in their hips with knives in past few days in the southern city of Jahrom.

According to information received from a source in Jahrom, about a dozen women have been victim of the violent attacks.

The women were attacked by at least four men riding on motorcycles.

The local officials have acknowledged that at least six women have been injured in this wave of attacks and they include five university students.

Sources in the city said the university students have identified one attacker who is affiliated with the paramilitary Basij Force.

Mohamad Beheshtifar was identified through recorded footage from a security camera near where he attacked one victim.

Mohamad Beheshtifar’s father is IRGC Colonel Jalil Beheshtifar who heads the Basij force in Ghotbabad district in Jahrom County, south of the city of Jahrom.

This criminal act followed recent protests by 300 students in Jahrom University where students protested against the suppressive measures in the university.

The Iranian regime officials in the city were forced to arrest the man after his identity had been revealed.

The attacker has said he had been motivated to attack after one cleric has said “killing of a Bad-Hejab (improperly veiled women) is permissible” and he has done this to act to “prevent vice”.

Earlier this month the Iranian regime’s parliament approved a bill officially putting the members of the Basij paramilitary force in charge of enforcing dress code in Iran and harassing and repressing women and youth in public under the pretext of “Promotion of Virtue and the Prevention of Vice”.

The law which passed with a majority institutionalized the work of members of the Basij paramilitaries that often patrol streets to enforce dress code and other behavior prescribed under the clerical regime’s misogynist laws.

The new law bolsters the work of the Basij members who often patrol streets and stop cars to interrogate couples about their relationships, to the resentment of many Iranians.