Iran: Girls to Marry at 13 in Hot Climate Regions 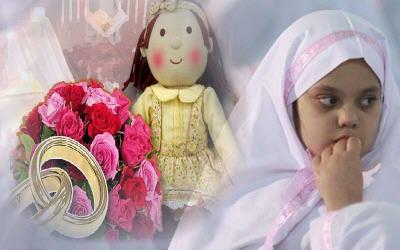 NCRI – Secretary of the Iranian regime’s so-called ‘Assembly of Islamic Revolution’s Educated Women’ claimed that “in hot climate regions, some (girls) may be well prepared to marry at 13 or even lower, and they may fall into corruption unless they get married.”

According to ‘Etelate Rooz’ news agency on Sunday December 13, Zahra Sajjadi, Secretary of the regime’s Assembly of Islamic Revolution’s Educated Women, pointed to the attempts made by a number of representatives to amend article 1041 of the Civil Code, and said that “the efforts made by some MPs seeking to gain religious scholars’ favor for their own programs and plans is basically wrong and futile.”

“To determine if a boy or a girl under 13 years of age is not able to get married depends on regional conditions, meaning that in hot climate regions such as Khuzestan and Bandar-e Abbas, you see girls and boys with early puberty, and there are certain conditions there that brings them more capabilities even from an economic point of view. So they are capable of managing their life at a much lower age.”, added Sajjadi.

She added: “some think they can change clerics’ minds by forming committees or think tanks. They also attempted once before to change clerics’ minds regarding the Stoning punishment to avoid being condemned by international communities. I pointed out at the time that stoning is an issue that is clearly stated in Quran, not something raised by religious scholars. Likewise, what they are saying now that father’s permission should not be regarded as the sufficient requirement for marriage, is exactly the same. These issues are letter of the Quran.”

According to Fars news agency, a member of the cultural commission of the Iranian regime’s parliament had stated last week that “we are seeking to attract religious scholars for amending article 1041 of the Civil Code on marriage age, so that father’s permission and age requirement are not regarded as the only factors to go ahead with the marriage and that with the amendment of the article, legal authorities be obliged to decide on underage marriage cases and that more supervision be done on registration offices and courts to avoid violations. “

Previous articleCommander of Iran Regime’s Affiliated Militia Admits: Iraq’ Mobilization Forces Could Be Present in Syria
Next articleIraqi Prime Minister: “Iraqi Paramilitaries Who Are Fighting in Syria Do Not Represent Us.”