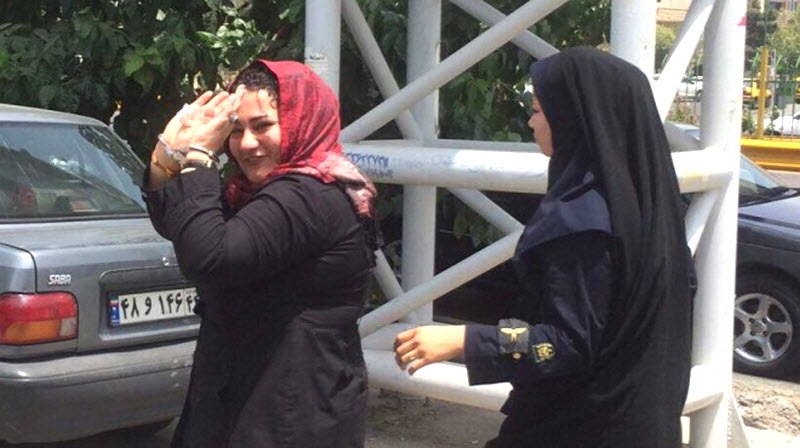 Atena Daemi is a civil rights activist that was arrested on 21st October 2014. She was immediately put into solitary confinement where she remained for 86 days before being transferred to the women’s part of Tehran’s notorious Evin Prison. The following May, she was charged with insulting the country’s supreme leader, propaganda against the regime and assembly and collusion against national security. Judge Moghiseh of Revolutionary Court Branch 28 gave her a sentence of 14 years imprisonment.

Ms. Daemi has written an open letter to her mother on the fourth anniversary of her imprisonment. She describes the harsh reality of life in prison and mentioned the hardships that she faces.

She was arrested when she was on her way to work. The security agents had threatened to detain her mother too. Ms. Daemi says to her mother in the letter that she thought her mother would have been frightened by the agents that were threatening to arrest her, but instead she proudly points out that her mother bravely stood up to them.
“I thought you would be scared, but you weren’t; I thought you would blame and reproach me, but you didn’t. In our own language, you told me to go– that this would be the first night I would spend away from home, but that you were still behind me, still with me, and that one day no child would be separated from their mother. That lifted a weight off my shoulders; it felt as though you had given me wings. I went, but you never left me for a moment; we were bonded more than ever, together, united.”

On the day of her sentencing, Ms. Daemi describes how her mother was so happy that she was not handed the death penalty – something that the family was expecting. However, she knew her mother was also scared, but managed to stay strong and hide her apprehension.

Because of her situation and the abuse that she has received in prison, Ms. Daemi went on hunger strike. She tells her mother that she was beaten and insulted by prison guards but emphasised that she remained steadfast against the guards.

During her time in prison, Ms. Daemi has missed out on so much. Her sister Hanieh got married and she was not granted furlough. Her sister was devastated but her mother pleaded with Hanieh to make sure the authorities cannot see her distress. “You came to visit me in Gharchak. Hanieh was restless but you calmed her down, telling her not to cry but to laugh and be joyous so that the authorities wouldn’t get the idea that their tactics can break [me].”

Ms. Daemi’s mother and sister have also been harassed by authorities and the family has had to deal with phone rights and visits being stopped, making an already painful situation even more difficult.

She finished her letter with the following poignant message: “Send my regards to all the mourning and bereaved mothers of Iran and tell them I shall call for justice for them as long as I live!”