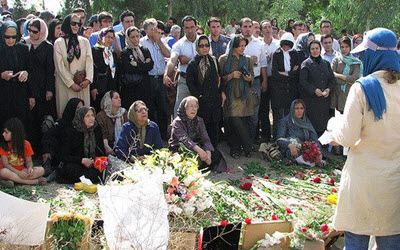 Activist mothers, known as Mothers of Laleh Park, and relatives of political prisoners, issued a statement on September 11, 2016, calling for prosecution of perpetrators of 1988 massacre.

NCRI – In their statement, these mothers said “the killings of group after groups of political prisoners in summer 1988 (was) a political massacre” whose victims “were tried unfairly in closed-door courts and sentenced to execution without their families knowing.”

They cited the constitution of the International Criminal Court in Nuremberg and described the massacre of political prisoners in 1988 as “a crime against humanity” and a “genocide.”

The mothers added, “The Islamic Republic regime remained silent for the past 28 years to protect its secrets against being unravelled. However, the mothers (of Laleh Park) and families of Khavaran (cemetery embracing victims of the 1988 massacre) as well as other activists have endeavored in different forms over these years in Iran and abroad to demand justice for the victims, confront this silence, and compel the regime to be held accountable.”

Mothers of Laleh Park in their statement demanded details of the summary trials and the mechanism of issuing the death verdicts, places of burial, and the last wills of the victims. They declared, “We demand justice against all the regime’s officials who were involved in the crimes of the 1980s and particularly the massacre of political prisoners in 1988. We want removal from power, prosecution and punishment of all the criminals who hold the highest judicial and executive authorities today.”