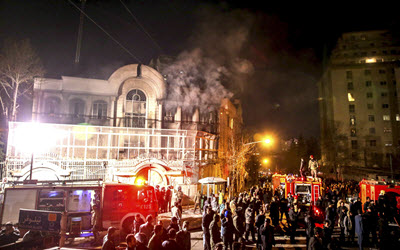 The mastermind of the Saudi embassy attack in Iran, which took place in January this year, has confessed that the attack was carried out after the Iranian government and leaders gave him a green light, Al-Arabiya.net reported on Sunday.

The report said: “The confession was revealed in an audio recording which was leaked recently. It also explains why authorities in Iran have delayed the trial of those who carried out the attack and why charges were dropped during kangaroo courts.”

The alleged mastermind of the attack, Hassan Kurdmihan, an extremist cleric, can be heard in the audio recording in a series of calls as he directed members of the para-military Basij and Revolutionary Guards (IRGC) to burn and destroy the embassy and seize all documents inside it, the report said.

Kurdmihan can be heard telling his followers: “The attack has been carried out upon a green light from the government and the regime. This is why security forces allowed raiding the embassy and did not act (against us).”

According to the recording published by Amad News through the Telegram app, Kurdmihan was talking to members of the Noor-e-Marefat institution, a lobbying party which he heads. The Noor-e Marefat institution includes Basij members.

Al-Arabiya.net’s report added: “Kurdmihan had earlier confessed to being the mastermind behind the attack and inciting members whom he described as ‘the revolutionary sons of Hezbollah’ from the Basij and revolutionary guards. He had also spoken about the ‘collusion’ of the Rowhani government which he claimed did not prevent the attack on the embassy but rather facilitated it.”

Two weeks after the attack on the Saudi embassy in Tehran, the Iranian regime’s judicial authorities said they interrogated Kurdmihan based on accusations that he incited the attack; however, they neither detained nor arrested him.

According to the report, Kurdmihan belongs to the militias of Ansar Hezbollah in Karaj, north-west of Tehran. It’s a group that’s close to the Iranian regime’s Supreme Leader Ali Khamenei, the report said, adding that besides Noor-e Marefat, Kurdmihan also heads nine other institutions that are close to lobbying groups and influential figures within the Iranian regime.

He also fought alongside the Iranian Revolutionary Guards in Syria, the report added.

In November and following several trials described as “kangaroo courts,” the Iranian authorities dropped the charges off all those accused of raiding, sabotaging and burning the embassy.

Previous article
Despite the Lifting of Sanctions, Why Iran’s Economy Has Plunged Into Recession? – Part 3
Next article
Lebanese-American Citizen on Hunger Strike in Evin Priosn