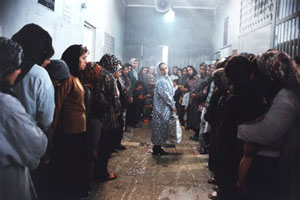 NCRI – At least two women were hanged to death on the eve of the International women’s day in a prison in Iran.

One of the prisoners identified as Mehrnoosh Qavasi, in her fifties, was executed after serving many years in prison.

The two women were hanged with 10 other prisoners in Qezel Hesar prison as part of new wave of executions in cities across the country.

The executions were carried out in secret without any report being published in the news media in Iran that are government controlled.

Meanwhile, on Saturday, a Grand gathering on occasion of International Women’s Day was held in Berlin with participation of over a hundred women personalities from five continents condemned the misogynist regime in Iran for suppressing women.

The participants in the gathering entitled “For Tolerance and Equality against Fundamentalism and Misogyny ” underscored that the advancement of the ideal of equality in the world today has come face-to-face with a formidable barrier, the Islamic Fundamentalism. This phenomenon is endangering the entire Middle East and the world through genocide, terrorism and discrimination and more than anything is hostile to women.

“The Secretary-General remains deeply troubled by the continuing large number of executions, including of political prisoners and juveniles”, the UN report said.