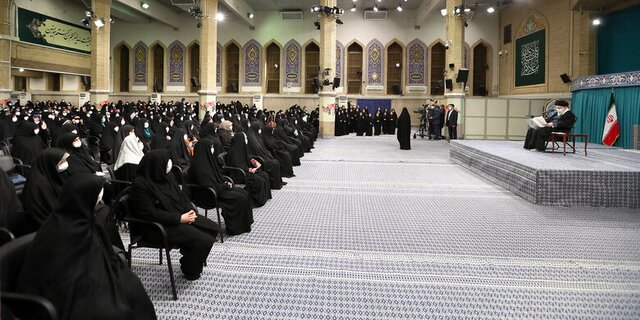 On Wednesday, the Iranian regime’s supreme leader Ali Khamenei, once again revealed the misogynous nature of the ruling theocracy while also acknowledging the leading role of the Iranian women in the nationwide Iran uprising.

“The most important tasks of women are a mother and wife. In other words, the role of housekeeping. No woman prioritizes her work over the safety of her child. Undoubtedly, if a woman is forced to choose between educating her children or work, the family is more important,” he said.

This has not been the first time Khamenei perfectly demonstrated the misogynous essence of his regime, liming the Iranian women’s role to “housekeeping and childbearing.” Let’s look at some of his remarks in past years.

Khamenei has been on record with numerous other misogynistic speeches, slandering Iranian women’s dignity. But his and his regime’s actions are not limited to these hate speeches toward half of the nation. The ruling theocracy has indeed deprived Iranian women of their basic rights, and it has established at least 27 institutions and organizations to oppress women. In his speech on Wednesday, Khamenei acknowledged that the number of female university students is more than the number of male students. Yet, the number of educated but unemployed housewives is also more than 60%.

During the recent uprising, many released prisoners shared harrowing accounts of rape and torture against the incarcerated female protesters. This has been the regime’s modus operandi and barbaric method to break women. Dr. Ayda Rostami was abducted for helping wounded protesters. Her family was informed the day after to retrieve her body. She was killed under torture.  In recent years, regime thugs have attacked women with acids under the pretext of “improper veiling.”

Imposing the veil (Hijab) by compulsion is diametrically against Islam. Faith is based on one’s free choice and out of free will.#Iranprotests#Iran

“I have been preoccupied with how to use intelligent and experienced women in different ranks of decision-making of the country, and we will certainly find a solution for it,” he said, acknowledging that unlike the narrative pushed by the regime’s pundits abroad, the Iranian women’s demands are not limited to some social reforms such as removal of the mandatory veiling. Khamenei’s regime has executed many educated women, so he didn’t have a sudden change of heart to use women in the “decision-making” process.

What has forced Khamenei to say these words is the nationwide uprising that has persisted despite the heaviest crackdown, rattling the regime’s foundation. The endurance of what many consider Iran’s democratic revolution, despite the regime’s attempts to quash it, confirms that it is indeed organized.

Iranian women play a leading role in this struggle across the nation, bearing the flag of freedom at all cost, chanting slogans such as “with or without hijab, onward to revolution.”  In fact, women have been the trailblazers in the fight against the misogynous regime. Many of them have sacrificed their lives while acting as leading officials or members of the Iranian opposition, the People’s Mojahedin Organization of Iran (PMOI/MEK).

This bravery and tenacity have inspired a nation and the world and terrified the misogynous regime to its core. Thus, Khamenei was forced to speak about the “decision-making” position of women. Due to his regime’s misogynous nature, taking such action or changing behavior, as Khamenei has repeatedly warned against it, would accelerate the system’s collapse as the latter rapidly draws closer.

This pathetic gesture well portrayed his absolute deadlock facing the true “force of change” in Iran. His oppression of women has backfired, and he has no other choice but to continue its brutality, which would add to the society’s restiveness.

Mrs. Maryam Rajavi, the president-elect of the National Council of Resistance of Iran, had spoken of the immense power of women as the force of change and their threat to the regime in her remarks on June 21, 1996, in Earls Court, London.

“The misogynous, inhuman mullahs are intent on destroying the rights and freedoms of women and trampling upon their human dignity in order to bolster the pillars of their regime. But to the mullahs, I say, if you think that you can get what you want because the yearning to live freely and think freely has died in the world, you are gravely mistaken. You have done your utmost to humiliate, suppress, torture, and slaughter Iranian women, but rest assured that you will receive the blow from the very force you discounted, the very force whom your reactionary mindset cannot allow you to take into consideration,” she said.