No appeasement of Tehran in the name of fighting IS, urges Iranian opposition 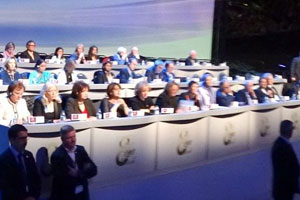 Excerpts of a report by AFP from International Women’s Day 2015 conference in Berlin, March 7, 2015 (Translated from French):
At a meeting with thousands of attendees in Berlin, the exiled Iranian opposition on Saturday called for the rejection of any appeasement towards the regime in Tehran under the pretext of fighting against the Islamic State (IS).

Maryam Rajavi, President of the National Council of Resistance of Iran (NCRI), which also includes the People’s Mojahedin Organization of Iran (PMOI), said: “It would be unrealistic to ask the arsonist to put out the fire.”

According to her, “the silence surrounding the interference of the Iranian regime in Syria, Iraq and other countries in the region, not to mention working with it on the pretext of the fighting against IS, is a strategic mistake.”

Mrs. Rajavi whom in her view “This is the clerical regime that created terrorism under the name of Islam” pointed out that Iran “is the founding state for most of the atrocities that fundamentalist groups have committed and continue to commit”.

She urged the international community “to target the epicenter of fundamentalism” to “overthrow” the regime in Tehran, “which acts as the godfather of the Islamic State”.

The highest-ranking American, General Martin Dempsey, expressed in the last few days his concerns about the role of Iran in the offensive to regain Tikrit in Iraq, which marks its involvement which is “most obvious” in Iraq since 2004.

The coalition led by the United States has no contact with the armed Shiite militias supervised by Tehran, which play an essential role in Tikrit, General Dempsey said on Friday to journalists.

Moreover, according to the military, Westerners fear that Iran’s interference exacerbates sectarian tensions in Iraq, and are not certain that Iran shares the strategic objectives of the coalition, committed to the unity of Iraq.

“Tikrit is an excellent example of what we are worrying about. Iran is taking control of the country,” deplored the Saudi Foreign Minister, Prince Saud Al-Faisal, on Thursday.

The Berlin meeting was being held while the head of American diplomacy, John Kerry, met his French counterpart Laurent Fabius, British Philip Hammond and German Frank-Walter Steinmeier, and the chief diplomat of the Union European Federica Mogherini in Paris. The meeting was held after a week of talks about the Iranian nuclear program in Montreux (Switzerland), the negotiations that the Iranian opposition is pessemistic about because it suspects the West of naivety towards Tehran.