Written by The Editorial Board
31st October 2013 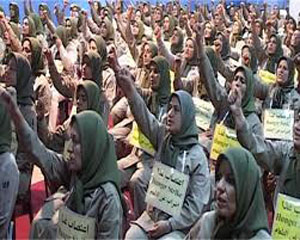 Source: The Washington Times
By: Shahabeh Barooti
On Sept. 1, Iraqi forces under orders from Iraqi Prime Minister Nouri al-Maliki staged a massacre in Camp Ashraf, shocking and infuriating the world with their sheer brutality and barbarity. The scenes of innocent people, handcuffed and fatally shot, were both horrifying and heartrending. Many of us here in Camp Liberty, where 3,000 Iranian dissidents reside, were personally touched by this tragedy. Many of us lost a brother, a sister, a parent, a son. All of us lost friends.

My mother was taken hostage along with six other residents of the camp, five of them women. I’ve been struggling day and night to find and rescue her, but to no avail. What I know for certain is that she is still in the custody of Iraqi forces and is incarcerated in one of Mr. al-Maliki’s horrendous “safe” houses, all of them notorious for the tortures practiced on the inmates. Mr. al-Maliki controls the location and conditions of the hostages and moves them frequently to secret prisons to prevent their being traced.

Knowing that every passing moment means more torment for my mother has made my life a living nightmare. What’s making it worse is seeing the United States and the United Nations — both responsible for the well-being of my mother and the other hostages — sitting by and doing nothing to free them. They have the power to change the situation.

Indeed, they had the responsibility to see that such a situation should never have developed. They had given their word, in writing, to every resident of Camp Ashraf, many years ago, to protect them with the backing of international law. Their failure to keep their promise, to do their duty, has cost the lives of 52 residents of Camp Ashraf. Continued U.S. and U.N. failure to do that duty could enable the al-Maliki regime to kill the hostages or extradite them to Iran, where they would surely be killed.

Perhaps a little history is required. More than 25 years ago, members of the People’s Mojahedin Organization of Iran fled their country to escape Ayatollah Ruhollah Khomeini and his mullahs, who took control after the 1979 revolution. They set up new homes in Iraq in a place called Camp Ashraf. They lived in peace, and their new city thrived. After the American invasion that toppled Saddam Hussein’s regime, they voluntarily gave up their arms and accepted the protection of the Americans.

That was fine until the U.S. troops left two years ago. The al-Maliki government was obligated to continue that protection, but by then, Mr. al-Maliki was a puppet of the mullahs. He did their bidding to harass the Ashraf residents and force them to take up new homes in Camp Liberty.

I hold President Obama and U.N. Secretary-General Ban Ki-moon responsible for anything that happens to my mother. What is worse, the man who has taken my mother hostage is coming to Washington on Friday to meet Mr. Obama in the White House. A hostage-taker in the White House?

To protest this injustice and inaction by all those who had made pledges to protect the residents of the camp, I have gone on a hunger strike since the day of the attack, and will continue this protest until my mother and the other hostages are freed, and the United States and the United Nations acts to protect us, as they said they would.

I cry out to Mr. al-Maliki: Let my mother and the other hostages go. Let those of us at the camp named Liberty actually have that liberty.
—–

Shahabeh Barooti is a resident of Camp Liberty, where about 3,000 Iranian members of the People’s Mojahedin Organization of Iran reside in Iraq.

Previous articleIraq’s Maliki in D.C.: Take Down the Welcome Sign
Next articleU.S. House Foreign Affairs chief presses Maliki on the safety of Iranians